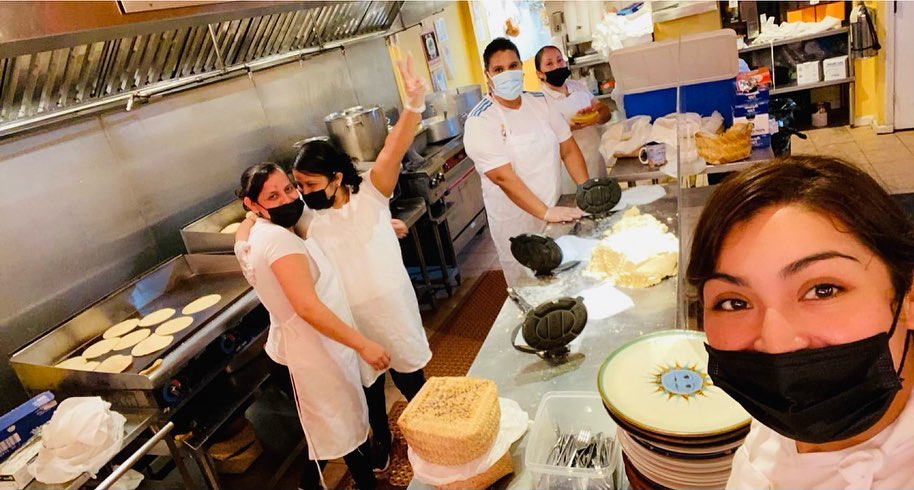 Masa Cooperativa taps into consumer demand for a key ingredient in tortillas and tamales.

In the Guatemalan village where she grew up, Lesly Lopez remembers grinding corn into masa as a daily activity. It’s the same in many villages in Central and South America. Masa is the corn dough used to create tamales, tortillas, and other staples of Latin American dishes.

The most important thing to know about grinding corn for masa, Lopez says, is to check the calibration of the burrs to make sure the texture is just right for the intended task — a finer grind for tortillas, slightly more coarse for the tamales.

These days, Lopez helps grind about 300 pounds of corn a week in South Philly Barbacoa, the buzz worthy Mexican restaurant in Philadelphia’s historic Italian Market, where owner Christina Martinez and her husband Ben Miller are strong advocates for undocumented workers. You may even catch them talking about their advocacy work on a 2020 episode of Netflix’s Chef’s Table.

As hard as the pandemic has hit these undocumented workers, they have mostly been excluded from unemployment insurance and most other common forms of emergency public assistance. Some states have filled the void, including New York with its unprecedented $2.1 billion fund for excluded workers – which has since run out of money.

For the next expansion of its work for undocumented workers, South Philly Barbacoa is incubating and creating Masa Cooperativa, a worker-owned masa processing cooperative. It’s still early days, but they’re already selling masa to individuals and restaurants in Philadelphia and as far away as Boston. Over the past few months, they have been visiting farmers in their area to establish business partners who can plant the heirloom maize varieties they want to buy. And they are taking steps to secure the space and storage capacity needed to process at least six acres of that corn this fall.

“The majority of restaurants here use a factory-made tortilla,” says Lopez. “It’s a good product, we should be able to sell it.”

The demand for higher quality and more authentically made masa is on the rise, according to the gastronomic magazine Bon Appetit. He reports that more affordable, table-sized masa grinding equipment is now available and many people want to move away from genetically modified foods. Some high-end masa-focused restaurants import traditional varieties of corn from Mexico, considered tastier and often more colorful, and grind the masa on-site like South Philly Barbacoa.

Masa Cooperativa sees potential in identifying corn varieties that can be grown closer to its home in Philadelphia. South Philly Barbacoa bought corn from two farmers in Lancaster, Pa., about a 90-minute drive away.

Corn, after all, is a human invention, which scientists believe indigenous peoples first created in Mexico. Eventually, the indigenous peoples of present-day North and South America cultivated thousands of ancestral varieties that worked best for the climate and soils where they lived. La Masa, owned by the workers, joins the Rodale Institutean organic farm about 90 minutes northwest of Philadelphia, to identify the best strains for what they need and provide 1.75 acres of corn for this year’s growing season.

The impetus for all of this work came from South Philly Barbacoa’s explorations into converting to a worker-owned co-op. The restaurant and some of its employees once participated in a cooperative incubator owned by workers from the Philadelphia Area Cooperative Alliance (which Next City covered). But it hasn’t worked yet, in part because of the lack of viable funding.

Buying an existing business as a worker-owned cooperative is more difficult compared to a traditional buyer (another entrepreneur or investor). One of the most common options for financing a business acquisition is to obtain a federally guaranteed small business loan. But the rules surrounding the Small Business Administration’s loan guarantee program basically make it impossible for co-ops to get in. Some proposals are circulating to change these rules, but Congress has yet to take action.

According to Miller, a bumper corn harvest in 2018 helped trigger a new plan. The restaurant began selling its extra masa to retail customers. This got everyone thinking: maybe they could line up some local farmers to grow even more better quality maize that they could process and sell. If not for the pandemic, 2021 might have been the first year they bought, stored, processed and sold their own masa, Miller says.

Lopez says she’s never had her own business and never considered starting one before, but so far she’s enjoyed doing it as a co-op with her co-workers, especially visiting small farmers to recruit them as business partners.

“It called me home to see and feel and experience that,” Lopez says.

Oscar is Next City’s senior economics correspondent. He previously served as Next City Editor-in-Chief from 2018-2019 and was a Next City Equitable Cities Fellow from 2015-2016. Since 2011, Oscar has covered community development finance, community banking, impact investing, economic development, housing and more for outlets such as Shelterforce, B Magazine, Impact Alpha and Fast Company.

Follow Oscar .(JavaScript must be enabled to view this email address)