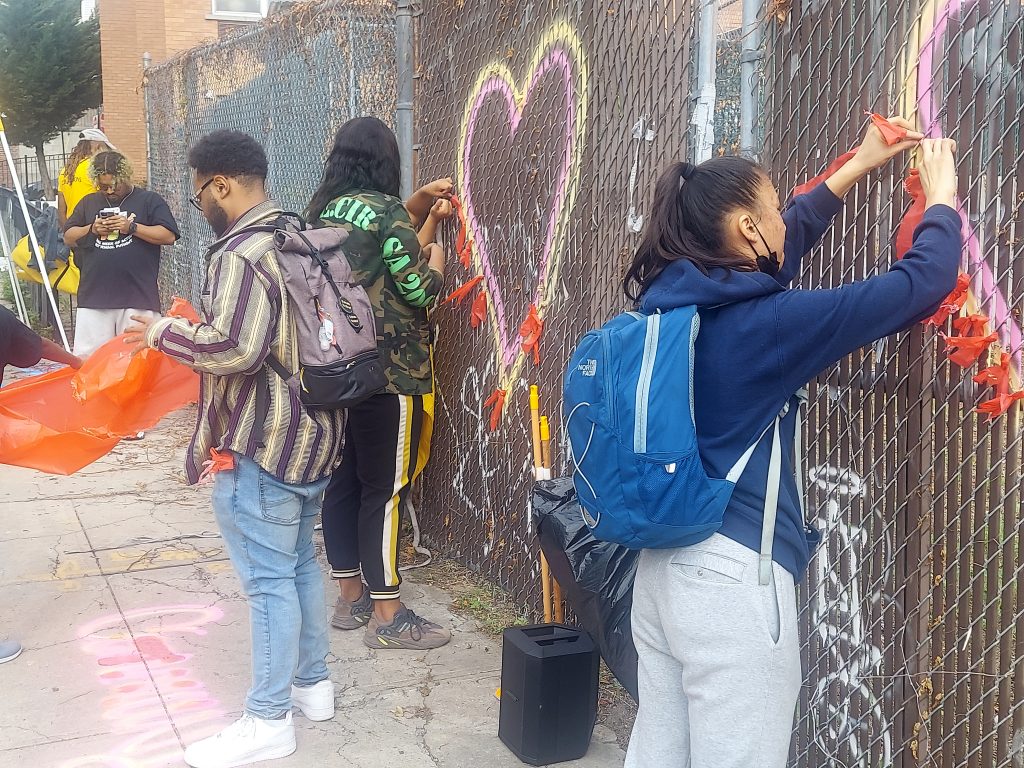 Northwest Bronx Community & Clergy Coalition (NWBCCC) and its youth arm, Sistas & Brothas United, recently hosted a joint gathering called â€œCommunity Not Copsâ€ and â€œPublic Land in Public Handsâ€ in the Crotona section of the Bronx. During the event, they called for community participation in the future development of the city‘s space, as well as an end to police patrols in the corridors and stairs of public schools in the city of New York.

When they arrived, they got to work removing debris from the street and sidewalk, tied colorful ribbons to the fence, and left several drawings that showed their plans for the vacant lot.

Edward Garcia, director of community development at the NWBCCC, then addressed the crowd, saying of the plot, â€œThis belongs to the City, doesn’t it? Thus, the City informed us that it had made a commitment to a developer for this property. He added: “But we still claim this property for the control of the community.” Garcia continued, “The community knows what’s best for the community.”

The lot in question is surrounded by private houses and small buildings on either side of the block. Garcia said: â€œHistorically, the city has done business with public goods, with developers who have no interest in meeting the needs of the community or getting involved. [the] community in the development process. He said the NWBCCC wants to put residents at the center and make sure they are the ones who decide what happens in the lot.

According to Garcia, the NWBCCC has identified 26 similar sites in the Bronx, many of them in the Northwest Bronx, for which they have detailed plans and which are listed in their November 2020 report. report. Garcia said the report includes “a feasibility analysis” for public land that is vacant and often neglected. He concluded: â€œThe community has many wants, and they would like to see something that reflects the needs of the community here,â€ referring to the Crotona site.

Meanwhile, Crystal Reyes, program director for Sistas & Brothas United and NWBCCC, explained the group’s other motivation for the rally, saying part of NWBCCC’s community land trust work is talking about community property. , and part of Sistas & Brothas United’s job is to call for investment in students, including the resources young people need in their schools, like social workers and counselors. They said it was necessary due to the fact that students were heavily supervised inside schools.

Reyes said the group would like to see a divestiture of part of the $ 431 million New York Children’s Advocacy Fund says the NYPD has switched to patrolling the city’s schools in 2019. Instead , she said the group wants to see those funds spent on housing, education, mental health and jobs in the community.

Asked about groups calling for more policing in schools after a recent spate of high-profile incidents, in and around several schools in the Bronx, Reyes replied, â€œThe reality is that schools are not equipped to handle type. mental crisis that young people go through. She added, “This is the first year they go back to school after 18 months, and schools haven’t invested enough in social workers and counselors. So young people have a lot of trauma due to them. to the pandemic and everything that is happening. “

September 2020 United Hospital Fund Report discovered that 4,200 children in New York state have lost a parent to COVID-19. The report found that, based on county-by-county data, 57% of parent deaths were concentrated in three New York boroughs: the Bronx, Brooklyn and Queens.

Regarding recent incidents of violence in schools, in particular, Reyes said: â€œMost schools had police officers in their schools. Yet there were still incidents. Much of what happens, trauma and violence like that, is the result of [the] trauma they face in their communities.

She then asked the fifty or so members present at the event to â€œshare their vision of this spaceâ€ and discuss the neighborhood security issues. The teens were encouraged to leave their ideas hanging on the chain link fence in the form of pictures and messages for the community. The group also planted seeds in several plastic planters that they left outside the fence.

â€œJayâ€ from Harlem was walking down Southern Boulevard when he noticed the large group. When told that the group was against business development and wanted to see another use of space, he said, â€œI would support a garden. He added, “Whenever you see people wearing matching t-shirts, you know they’re doing something right.”

An apparent local resident then joined the conversation, blurting out, â€œI don’t care what they do with it; turn it into a park.

A sign hanging from the fence of the site, posted by the New York City Department of Housing, Preservation and Development (HPD), mentioned Evelyn Cabrera as director of HPD Property. Norwood News called Cabrera’s office on Tuesday, November 2, looking for information on the proposed sale of the property, but the call went on voicemail. Cabrera had not responded by November 30.

As reported, City officials recently confirmed Norwood News that a targeted transition in June 2022 is on track, according to which nearly 5,000 school security officers will no longer be under NYPD oversight, but after June 2022, under the oversight of the Department of Education.

A new Police Commissioner is expected to be appointed under the leadership of Mayor-elect Eric Adams in 2022, as the NYPD announced on December 2 that Police Commissioner Dermot Shea has applied for retirement, as well as the second in command of the department, First Deputy Commissioner Benjamin Tucker. Both men will complete their full terms and retire at the end of the year. The news follows the November 25 announcement that department head Rodney Harrison is also due to retire on December 30. Shea has been quoted by various media outlets as saying he is working with the mayor-elect’s team to ensure a smooth transition for the new administration.

* SÃ­le Moloney contributed to this story.