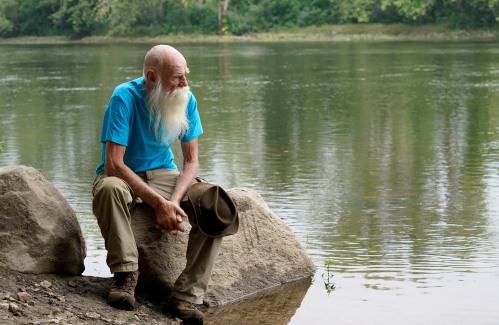 Nearly a quarter of a million dollars donated and set aside for Canterbury squatter David Lidstone to buy his own property is now in the hands of River Dave himself, after the trust that held the funds was dissolved in late March .

The trust held more than $200,000 in donations given to Lidstone last year and had stipulations on how the money could be spent. Last week, administrators closed the account at Merrimack County Savings Bank, administrator Jodie Gedeon said. Lidstone picked up the check on Monday.

The 82-year-old hermit came into the limelight last summer when he was arrested for staying on the Canterbury Woodlot owned by Vermont landowner Leonard Giles, a place along the Merrimack River where Lidstone has taken up residence for over two decades.

While he was in prison, the cabin Lidstone had built suddenly burned down. The fire was discovered hours after one of Giles’ family members went to the site to dismantle the structure. Firefighters said it was accidental.

Donations poured in from people who read Lidstone’s story and his off-grid lifestyle. Billionaire Alexander Karp, founder of Palantir Technologies and resident of Grafton County, contributed $180,000.

These funds and other donations were placed in a trust, overseen by three trustees chosen by Lidstone. The money was meant to be used for her well-being, including paying for medical bills, living expenses and a new place to live, according to Gedeon.

Gedeon said the decision to dissolve the trust came after heated disagreements with Lidstone over access to funds and how the money could be used. She said Lidstone tried to withdraw $30,000 from the account in late March, telling administrators he wanted to buy a truck for his son. “We tried to follow the rules of the trust,” she said.

A voicemail message left in Lidstone was not returned on Friday.

Although most of the media generated sympathy for the elderly former lumberjack, a Bangor Daily News The December story painted a more complex picture of Lidstone, who is estranged from his wife and some of his children.

“When we last spoke, he was very vulgar and disrespectful,” said Gedeon, who once picked up Lidstone upon his release from prison. “That’s not the David I know.”

Accusations have been made about the access to money and motives of administrators on a Facebook group supporting River Dave in recent weeks. The group was shut down by a Page admin on April 5, halting all further activity.

“Any time money is involved, it gets convoluted,” Lidstone neighbor Bob Albini said Friday. “It was never Dave’s thing, he never asked for a penny. All of a sudden, that’s what everyone is worried about.

Lidstone returned to the site during the winter and was again arrested. In March, he was indicted on a criminal trespassing charge.

Albini called the situation “heartbreaking” and said he was sad that Lidstone lived in a tarpaulin-covered woodshed next to the ashes of his cabin during the coldest months of the year.

“I hope he takes the money and runs away,” he said.

Gedeon said that before closing the account, administrators tried to contact Karp and a legal representative for the billionaire agreed to hand over the money directly to Lidstone.

“We were done with all the conflict and fighting and negativity and just wanted to put it behind us,” she said. “I feel like we did the right thing.”

In a civil contempt hearing on March 31, Merrimack County Superior Court Judge Andrew Schulman ruled that Lidstone would be fined $500 for each day he remains on the court from the April 11. Those fines will go to Giles, who has spent more than $390,000 on the case since 2016, according to court documents.