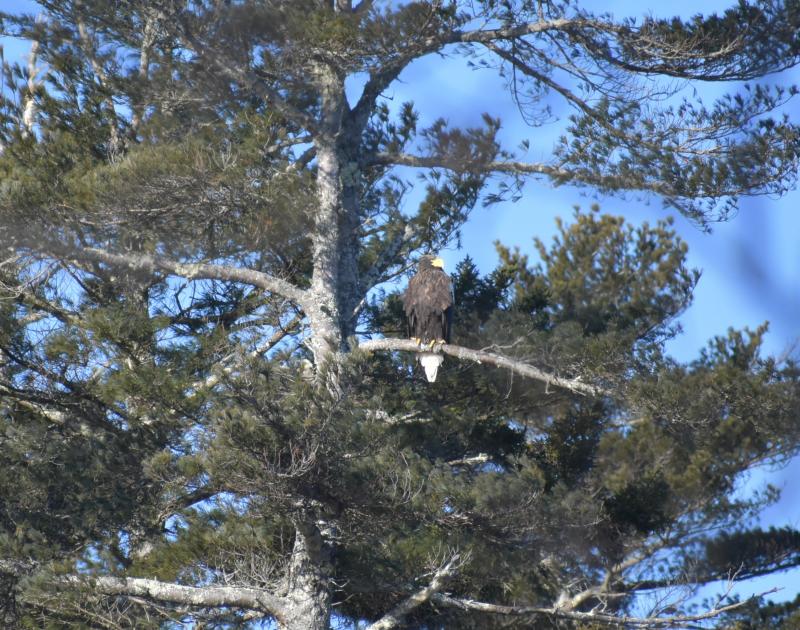 The Sea-Eagle landed… at Boothbay

Since we wrote about Steller’s sea eagle which appeared in and around Five Islands a few weeks ago, most readers will probably know that the bird has moved to Boothbay Harbor where it has attracted hundreds of people eager to see or photograph it. The extreme rarity of the bird, native to Siberia (more information in our previous column, “A ‘Steller’ Bird”), which is why so many bird lovers are willing to travel even from all over the United States for the chance to see it and count it on their life list. The bird’s incredible rarity and the large crowds of birdwatchers gathered to catch a glimpse of it have meanwhile made it a story-worthy event in many media outlets, from state to national. And sure enough, the news reports increase the number of curious people and have made the trip to Boothbay to try and see it for themselves.

The bird had disappeared from Five Islands on January 2, then was spotted at West Boothbay on January 6. We enjoyed following the news of the rediscovery, the arrival of birdwatchers in the Boothbay area, and where the bird was spotted. . Over the weekend, however, we decided to go out and witness the excitement ourselves. It was a cold but gorgeously beautiful blue sky day, and there were birdwatchers everywhere. Scores of birdwatchers were gathered along the road near the Spruce Point Inn, where they watched the bird sitting in a tree on Mouse Island. We saw even more birdwatchers massed in the parking lot of the aquarium. Others were staked on Southport Bridge. Smaller numbers were scattered in places like the Boothbay Region Land Trust‘s Oak Point Agricultural Preserve. When we scanned from the parking lot of the Tugboat Inn, several other birders joined us for a moment, and we saw birders (identified by the binoculars in their hands) scattered all over town.

The hundreds of bird watchers who have made the trip to Boothbay over the past week and a half have enjoyed and shared information about many businesses in the Boothbay area where they can stay, eat, drink and s gasoline. We imagine that many of those hundreds of people who have never visited the Boothbay area before will probably be fascinated by the idea of ​​returning during the warmer times to see the incredible birds, land reserves and other places that make Boothbay special, and to enjoy boat tours and other places to stay and dine.

Some of the rare Steller’s sea eagles that have traveled to Alaska from Siberia have stayed or returned to the same location for several years – one even returned every summer to a remote location in the Tongass National Forest for 15 years. Our Steller’s sea eagle seems to be finding food and places to rest and sleep. Granted, the cold weather and waterfront habitat is arguably similar to what the rest of its genus experiences in Siberia and northern Japan. This could mean that he will stay in our area for an extended period. We expect the number of bird watchers coming to see it to dwindle at some point, but if it stays nearby it will still be an attraction for those who haven’t been lucky enough to have seen it yet and for those who just want to see it. every year because it’s so unique.

By the way, we missed seeing the bird by a few minutes. He had just flown north into the harbor when we arrived at the Spruce Point Inn and walked to the bird watchers gathered on the shore. They were all leaving to fetch him from other places, or to have lunch or hot coffee. On the way back we decided to pass by Knickercane Island thinking it would be a place no other bird watcher would check. We were wrong! There were already three carloads scanning each tree with the faint hope that the bird would have flown in that direction. A regal-looking adult bald eagle swept across the water from the tallest white pines on the north side of the bridge, looking magnificent as the near-full moon appeared above the trees. We may not have seen the sea eagle this time, but we were filled with happiness and appreciation as we sailed home at the last light of day.

Jeffrey V. Wells, Ph.D., is a Fellow of the Cornell Lab of Ornithology and Vice President of Boreal Conservation for National Audubon. Dr. Wells is one of the nation’s leading bird experts and conservation biologists and author of “Ornithologists Conservation Handbook.” Her grandfather, the late John Chase, was a columnist for the Boothbay Register for many years. Allison Childs Wells, formerly of the Cornell Lab of Ornithology, is senior director of the Maine Natural Resources Council, a statewide nonprofit organization working to protect nature in Maine. Both are widely published natural history writers and are the authors of the popular books, “Maine’s Favorite Birds” (Tilbury House) and “Birds of Aruba, Bonaire, and Curacao: A Site and Field Guide,” (Cornell University Press ).