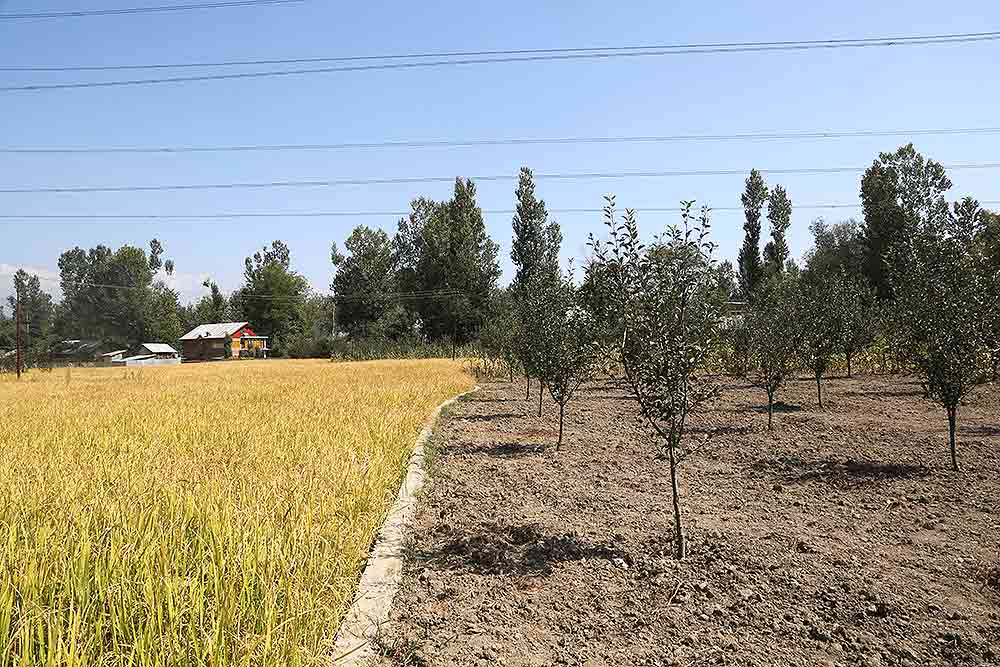 Srinagar: Six years ago, Hilal Ahmad, a 60-year-old farmer from Anantnag, converted his paddy field into an apple orchard after suffering huge losses. What seemed like a tough decision then turned into a blessing for him now.

“My land is the only source of income, so it was a very difficult decision to make. However, I started to grow apple trees of foreign varieties with high density and high yield. Gradually the results came in and his income grew,” he said.

Similarly, Abdul Hamid, a 50-year-old farmer from Hama village in Anantnag district, was generating profits of Rs 20,000 from the paddy he grew on his 10-Kanal of land. “A turnaround in ideas and his change to growing apples on the same land is now earning us a profit of three lakh rupees a year. We have a family of six and all are dependent on the apple orchard,” he said declared.

Kashmir is witnessing a change in the landscape of agricultural fields. The vast rice paddies are now replaced by neat rows of apple trees. Experts believe that the change is driven by economic considerations, as the horticulture sector offers farmers “5-6 times (500-600%)” monetary benefits compared to paddy cultivation.

According to figures from the Horticulture Department of Jammu and Kashmir seen by The Kashmir Monitor, the horticulture sector has grown by more than 400% in the valley since 1974.

“The main motivating factor that drives farmers to grow apples rather than grow paddy is the monetary benefits. Moreover, the first is a dynamic sector. Technological advancements in the horticulture sector have led to a higher productivity, thus increasing farmers’ incomes. While paddy cultivation does not give too much economic benefit,” Dr Rauf said.

Senior Assistant Professor in the Department of Geoinformatics at the University of Kashmir, Dr Irfan Rashid said economic considerations are the main reason for the change.

“Additionally, the other reasons are depletion of river flows, increased urbanization in upstream areas and climate change,” Rashid said.