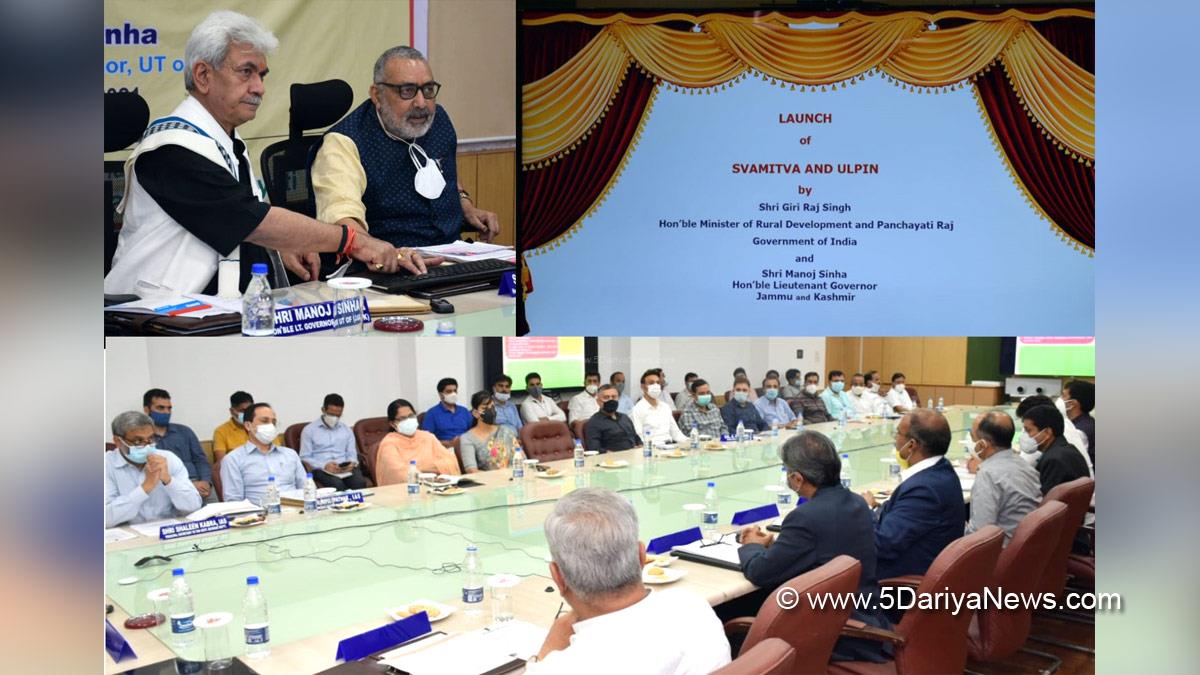 Union Minister for Panchayati Raj and Rural Development Sh Giriraj Singh and Lieutenant Governor Manoj Sinha launched the Unique Land Plot Identification Number (ULPIN) and Village Survey online today Abadi and Mapping with Improvised Technology in Village Areas (SVAMITVA), two ambitious projects in Jammu and Kashmir. When launching the programs today at the Civil Secretariat here, the Lieutenant Governor noted that the technology-based programs will change the rural landscape in terms of quick and convenient access to landowners, especially those who live in. abadi-deh. “The initiatives will also help to eliminate corruption and, therefore, this is another step towards friendly, transparent and corruption-free governance,” said the lieutenant governor. Relevantly, J&K is the 13th state / UT in the country to implement ULPIN. Union Minister for Rural Development and Panchayati Raj, Sh Giriraj Singh said the initiatives launched today reflect the work of the central government on the principles of easy compliance and transparency. He said the Union government is committed to the holistic development of Jammu and Kashmir. Funds, functions and officials of PRI and urban local communities.

Referring to the transfer of powers to PRI and ULB, he said, “the fact that what had not been done since 1992 has been done effectively over the past year shows the commitment of the administration of the UT in favor of policies favorable to the citizens and a decentralization of powers “, declared the Minister of the Union. It can be mentioned that ULPIN will be a single and authoritative source of information on any piece of land or property in order to facilitate the direct transfer of benefits to farmers / landowner accounts, using loans, emergency relief. disaster, etc. Parcel number like Aadhar will help automatic update of registration and transfer. Further integration of ULPIN with various services will greatly facilitate landowners. Likewise, SVAMITVA will be like a legally sacred property card, an authoritative source reflecting the registration of property / possession. The programs, covering the length and breadth of the Union’s territory, will involve the use of the most modern technology for surveys, data extraction and the final compilation of records for public use. These are the latest initiatives in the Indian government’s land registry reforms. The projects will be completed within a year. When completed, they will allow villagers and landowners to access their property income records, thus avoiding reliance on the human interface. Those in attendance included Sh Farooq Khan, Advisor to the Lieutenant Governor; Sh Ajay Tirkey, Secretary of the Land Resources Department, GoI; Dr Arun Kumar Mehta, Chief Secretary; Sh Shaleen Kabra, Principal Secretary of the Revenue and Home Affairs Department; Sh Bipul Pathak, Principal Secretary of the Department of Rural Development; Sh HS Meena, DoLR Additional Secretary; Ms. Sarita Chauhan, Commissioner-Secretary, Ministry of Labor and Employment; Ms. Yasha Mudgal, Cooperatives Secretary; Dr Raghav Langer, Division Commissioner Jammu; Amit Kumar, IT secretary; Deputy Commissioners and senior officials from GoI and various UT departments. The presidents of the DDC, the representatives of the PRI, as well as others, also participated in the launching ceremony via virtual mode.

Column: A New Way to Look at History in the East End