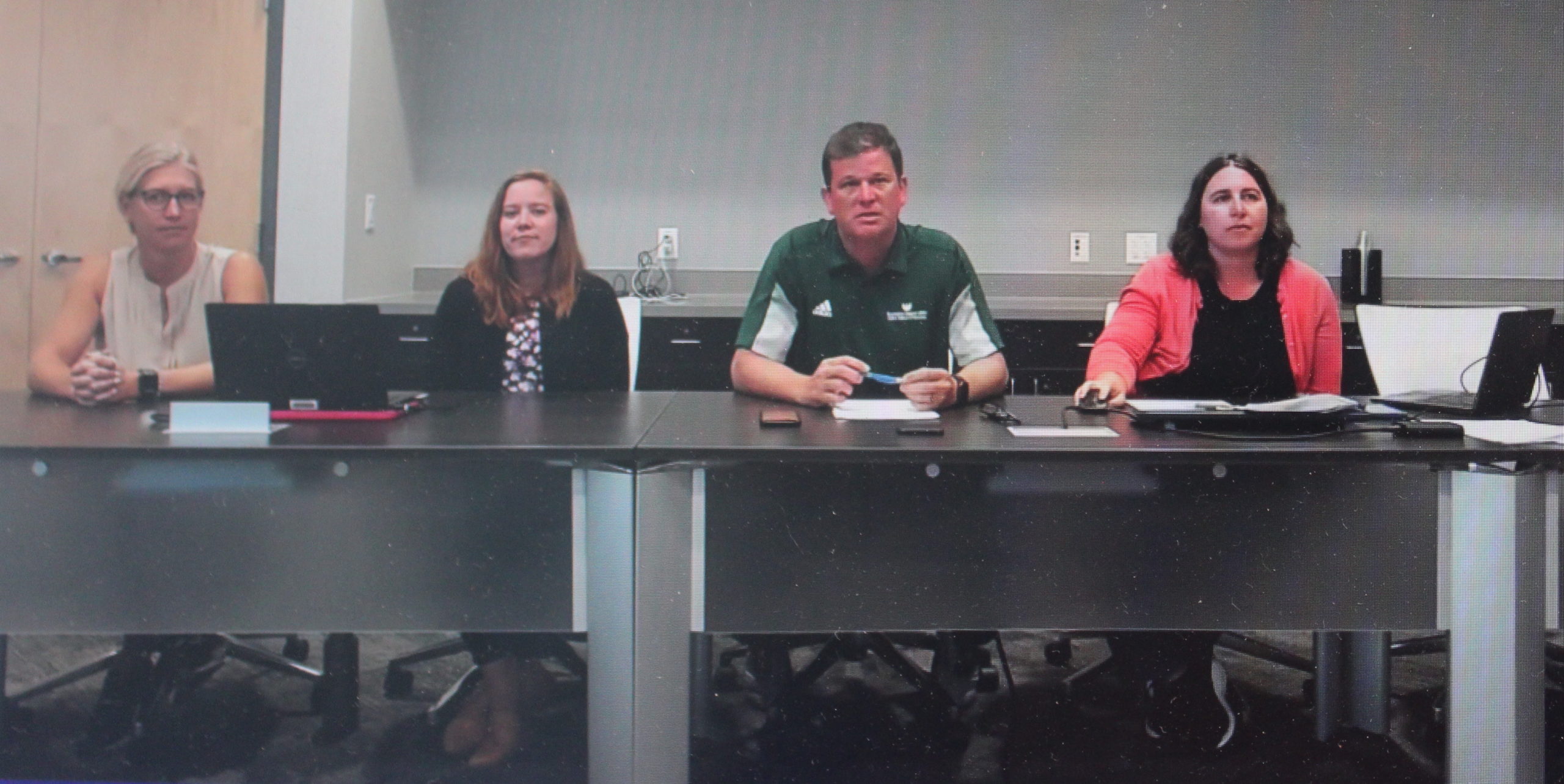 (Left to right) Erica Sieden and Bridget Faust-Accola, both of NOAA; Matt Dornbusch, dean of the Cofrin School of Business at the University of Wisconsin-Green Bay; and Emily Tyner, director of freshwater strategy at UW-Green Bay, appear Sept. 8 for a virtual public meeting on recommended preliminary sites for natural areas to be included in the proposed Green Bay National Estuarine Research Reserve (NERR) . Photo by Kevin Boneske.

The property in the Sturgeon Bay area is part of 11,494 acres of land recommended for inclusion in the Green Bay National Estuarine Research Reserve (NERR).

In the Sturgeon Bay area, the lands south of the Highway 42/57 corridor on both sides of the shipping channel include less than 700 total acres consisting of properties owned by Crossroads at Big Creek, Door County Land Trust, the Sturgeon Bay School District and the Wisconsin Department of Natural Resources.

Sturgeon Bay is one of three areas receiving a preliminary recommendation for NERR, along with the Peshtigo and Lower Bay areas. They were among nine candidate areas under consideration for designation in the NERR.

Sturgeon Bay Mayor David Ward said the preliminary recommendation to include Sturgeon Bay in the NERR is “a good first step. We also want the visitor center here.

The Town of Sturgeon Bay has formed its own ad-hoc NERR advisory committee related to the research reserve. The selection of the location of the NERR Education and Care Center is not expected before 2023-2024.

“We will now be part of a larger system,” she said.

Door County Land Trust (DCLT) executive director Emily Wood said the DCLT “is very interested in the prospect of including Sturgeon Bay as a NERR research site. We already know that the lands we protect at the Sturgeon Bay Ship Canal Nature Reserve are an ecological gem that is home to several rare or endangered plant and wildlife species. NERR could attract top researchers and scientists to help us better understand the watershed and its threats. DCLT hopes that Sturgeon Bay’s unique waters and landscape will make it a very competitive site for selection.

The Green Bay Bay Area is being established as the 31st NERR in the nation. The 30 already existing reserves in the United States were established through the Coastal Management Zone Act and are partnerships between the National Oceanic and Atmospheric Administration (NOAA) and coastal states.

NOAA provides national funding and guidance for each site, which is operated by a state agency or lead university with input from local partners. For the Green Bay NERR, the University of Wisconsin-Green Bay leads the designation process.

The preliminary recommendation for the Green Bay NERR was discussed at public meetings Sept. 7-8 at UW-Green Bay.

Van Helden said Peshtigo and the South West Coast – which was combined with Point au Sable as the Lower Bay region – each included the top picks of the five sub-teams for NERR.

She said the full committee had agreed not to have a single site for NERR, which was to include the Peshtigo complex and Southwest Shore.

Van Helden said the committee added Sturgeon Bay as a third site after carrying out an analysis of strengths, weaknesses, opportunities and threats.

“If we propose a NERR site for the natural areas of Peshtigo and the South West Coast, what are we missing? ” she says.

Van Helden said representation of the eastern shore of Green Bay Bay was lacking with these two sites, which led to Point au Sable being added to the southwestern shore to form the Lower Bay area.

“[Point au Sable] doesn’t look like a third site,” she said. “It’s sort of a continuation of the Southwest Shore site.”

“With these three sites in mind, sort of this new Lower Bay complex, the Peshtigo River complex and the Sturgeon Bay complex, we felt like [these were] good sites to recommend,” she said. “This is our preliminary recommended site for the Green Bay NERR Natural Areas. We felt like it captured all the criteria as best we could.

Emily Tyner, director of freshwater strategy at UW-Green Bay, said the next steps in the site selection process include accepting public comments until Sept. 15, the site assessment committee. site reviewing public comments and then making a final recommendation to the site. -coordinating committee the week of September 19.

The Site Coordinating Committee will vote on the recommended site the week of September 26 and have subsequent conversations with affected land managers and delineate the NERR boundary in early October. A site nomination document will be sent to the governor’s office in late October.

Bridget Faust-Accola of NOAA’s Office of Coastal Management said the site nomination document takes an average of three to four months to review.

“Ultimately, NOAA will make a decision,” she said. “We will decide whether to accept, reject or modify the nomination.”

Faust-Accola said site selection and nomination is the second step in a six-step process for NERR. This timeline includes preparing an Environmental Impact Statement with NOAA in 2023, selecting an NERR Education and Visitor Center site, writing an NERR Management Plan in 2023 and 2024, and designation of an NERR zone at the end of 2024.