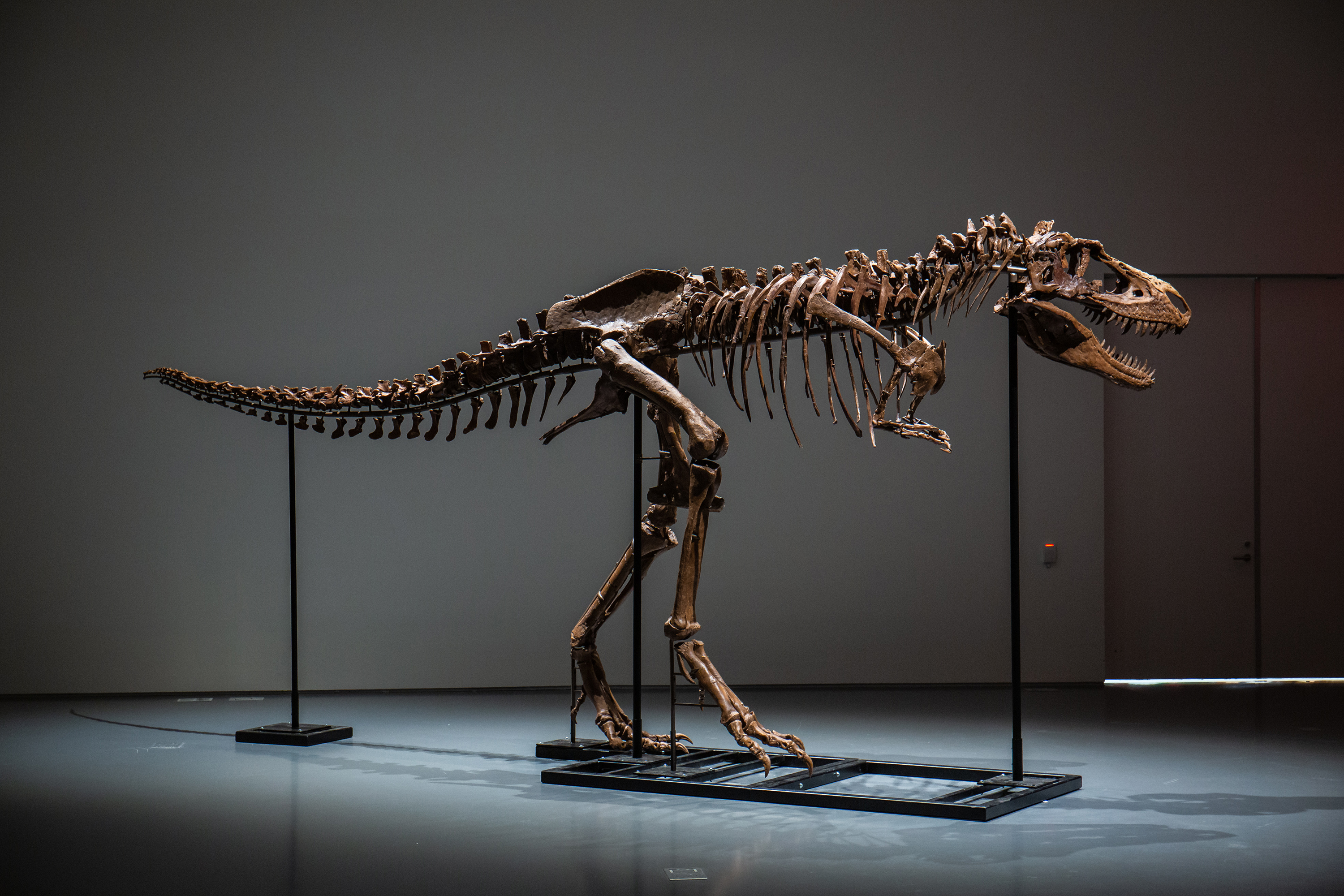 (CNN) – The ancient skeleton of a Gorgosaurus was auctioned for the first time today and sold for just over $6 million. Whoever bought it – who is currently unknown – now also has the unusual possibility of naming it.

About 77 million years old, Gorgosaurus is a relative of the deadly Tyrannosaurus rex, but faster and with a stronger bite force, according to Sotheby’s, the auction organizer. Sotheby’s offered the Gorgosaurus as the highlight of its natural history auction which kicked off at 10 a.m. ET today. The rare fossil is expected to attract bids of up to $8 million, according to the auction house.

The fossil was discovered in 2018 on private land in the Judith River Formation in Choteau County, Montana, and has 79 bone elements, according to Sotheby’s. All other known Gorgosaurus skeletons are in museum collections, making it the only such specimen offered for private ownership, which some scientists consider problematic for scientific study.

“During my career, I have had the privilege of handling and selling many exceptional and unique objects, but few have the ability to inspire wonder and capture the imagination like this incredible Gorgosaurus skeleton,” said Cassandra Hatton, global head of science and popular culture at Sotheby’s. , said in a press release.

“Excavated only a few years ago, a Gorgosaurus has never been auctioned before, and the opportunity to share this dinosaur with the public for the first time is a tremendous pleasure and a highlight of my career.”

Measuring just over 9 feet (2.8 meters) tall and 22 feet (6.7 meters) long, Gorgosaurus was an apex carnivore that resided in the United States and Canada during the late Cretaceous period. Like T. rex, Gorgosaurus is a large theropod and has similar features, such as a huge head with dozens of sharp, curved teeth and two small front limbs.

“As the master hunter of its time, in which it was believed to hunt in packs of four, Gorgosaurus was a dominant force and a singular predator,” according to Sotheby’s. The dinosaur’s name is derived from the Greek words for “fierce lizard”.

The Gorgosaurus sale is the second sale of a fossilized dinosaur skeleton by Sotheby’s. In 1997, the auction house sold the T. rex fossil nicknamed Sue, one of the largest and most complete dinosaur fossils ever discovered, to the Field Museum in Chicago for $8.36 million. The specimen was named after collector Sue Hendrickson, who discovered the significant find. Excavated from South Dakota, Sue was the most valuable fossil ever sold at auction at the time.

Sue’s auction was also controversial and, at the time, the latest example of a new challenge for the management of fossil resources: John W. Hoganson, paleontologist emeritus of the North Dakota Geological Survey, wrote in an edition of 1998 newsletter of the survey of the potential impact on scientific progress of a “thriving international market for fossils and the resulting collection and sale of fossils by profiteers”.

“The professional paleontology community eagerly anticipated the T. rex auction due to uncertainty over whether the important specimen would end up in a private collection, rendering it unavailable for scientific study and exhibition. public, or in a public repository in this country,” he wrote. “The ultimate concern was the effect the sale would have on the science of paleontology.”

During Hoganson’s tenure, he established the North Dakota State Fossil Collection and helped craft federal legislation to protect fossil resources on federal lands in the United States, according to the state government.

Stan, the world’s most complete Tyrannosaurus rex skeleton, set a new world record in 2020 when it sold for $31.8 million at Christie’s. At the time of the sale, paleontologists feared the fossil would be lost to science, but in March Abu Dhabi’s Department of Culture and Tourism revealed plans for Stan to be a star attraction at a new museum. of Natural History, which should open its doors in 2025 in Abu Dhabi. Dhabi, as CNN previously reported.

While Sue remains on public display at the Field Museum, Stan awaits a permanent home, and the Gorgosaurush has been sold, some scientists aren’t happy that this trend will continue.

“In my view, there are only downsides,” said P. David Polly, professor and chair of the department of Earth and Atmospheric Sciences at Indiana University in Bloomington. “While there is certainly no law in the United States that supports this for fossils that come from private land, it is easy for me as a scientist to argue that this fossil is important to all of us and should really be deposited in a public repository where it can be studied – where the general public can learn from it and enjoy it.”

Fossils on private land are owned by private individuals who can do with them what they want, while fossils on public land are regulated by the federal government and are essentially owned by the government or “the people, if you will,” a Polly said. “When a fossil is auctioned off like this and it’s expected to fetch millions of dollars, one of the things that does that is to tell private landowners that the fossils on their land should really be monetized.”

Other scientific experts, however, have acknowledged that the museum collection has historically included acquisitions from commercial sources.

“It makes me sad that there’s a price tag on dinosaurs,” but “it’s not a black or white issue,” said Gregory Erickson, professor of vertebrate anatomy and paleobiology at Florida. State University at Tallahassee. “There is a history of museums buying commercial specimens.”

“It’s a brave new world for our science,” said vertebrate paleontologist Steve Brusatte, professor and personal director of paleontology and evolution at the University of Edinburgh, via email. “In a world where dinosaur skeletons fetch millions, what about scientists and museums, who can’t afford such inflated prices?”

And according to Polly, what would be the best result of this auction? “Whoever sells it should listen to what I just said and have a conversion experience and donate it to a museum,” he said. “Second best would be for someone rich to hear this kind of message and donate a lot of money (to a museum) so it could be bought for a museum.”