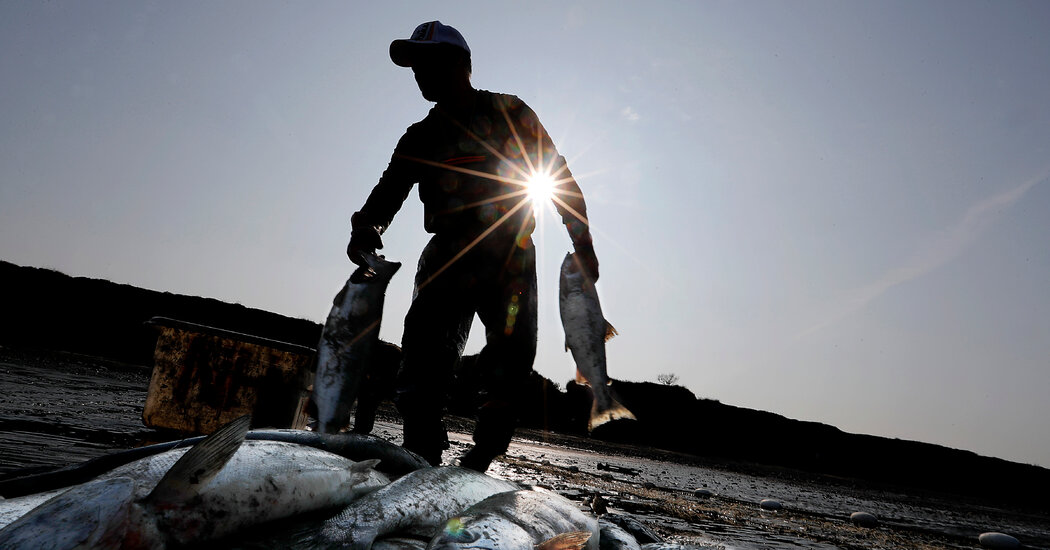 Reviews | How to protect Bristol Bay salmon in the long term

ANCHORING – Bristol Bay is a place defined by salmon. For those of us who live and work in this region of wetlands, rivers and tundra, our lives revolve around this amazing fish. This spring, the Environmental Protection Agency proposed a ban on mining waste disposal – a move widely celebrated to protect the bay and its salmon from the infamous Pebble Mine project, which has been seeking to mine precious metals beneath the bay for decades. decades. But this ban, while powerful, alone will not fully protect Bristol Bay if approved.

History has not been kind to wild salmon. Most places that once had healthy wild salmon runs now have few fish returning to spawn. Bristol Bay is one of the last strongholds for all five species of Pacific salmon, especially sockeye. But Bristol Bay salmon also face threats. The most immediate is the proposed cobble mine, which if built would mine a large deposit of copper, gold and molybdenum that straddles two watersheds critical to Bristol Bay salmon runs. If allowed to proceed, Pebble could become one of the largest surface mines in North America, if not the world.

Last year, more than 65 million wild sockeye salmon returned to the region’s commercial waters, and this year the Alaska Department of Fish and Game predicts a return of just over 73 million. million. In addition to feeding local residents, these fish support a thriving commercial salmon industry that generates $2.2 billion in annual economic benefits and half of the world’s sockeye salmon harvest.

Scientific studies have shown that the development and operation of a mining project like Pebble on Bristol Bay could cause irrevocable damage to salmon in the region. The Environmental Protection Agency notes that one likely impact is the “permanent” loss of around 100 miles of streams that support salmon. Mining operations, which could last anywhere from 20 to more than 100 years, would also generate around 10 billion tonnes of waste rock, according to the partnership behind the project.

In May, the EPA proposed to restrict Pebble’s use of certain waters in three major watersheds as a mine waste disposal site under the Clean Water Act. The agency has held hearings in Alaska on the veto and is accepting public comment until September 6. The veto, if put into effect, would be a major step towards blocking the current mining proposal. But without Congressional and land conservation legislation, EPA regulatory protection won’t be enough. And this fight against Pebble, which began nearly two decades ago, could go on for decades more.

While proponents of the project claim that Pebble could be a new economic engine for the region and Alaska and complementary to fishing, these claims are unfounded. Northern Dynasty Minerals, the company behind the project, has only completed a preliminary assessment of the project’s economic feasibility, and most of the design plans for the project’s infrastructure are still purely conceptual. And while the company said the construction and operation of the mine would employ thousands of people, residents of Bristol Bay rightly wondered whether the jobs would be substantial or permanent. Protect the commercial fishing economy, subsistence uses, traditional activities and cultural resources of the region from the impacts of mining operations far outweigh any such speculative benefits.

EPA’s actions under the Clean Water Act have historically been enduring, but they may be changed or reversed by a future administration. Additionally, the EPA’s proposal focuses on the core of the Pebble deposit. There are other mining prospects in the area, many controlled by Pebble, that would not be regulated under the proposed action. Northern Dynasty Minerals has sworn to stay the course and continues to examine new mining scenarios and technologies that would allow it to continue regardless of what the EPA proposes or approves.

This is why federal legislation is also needed to address the threats posed by Pebble. Such legislation could serve the interests of the State of Alaska, ensure the economic resilience of Bristol Bay, and permanently protect our salmon from risks such as the mining of the Pebble deposit. Although specific proposals are still being drafted, the legislation could protect much of the region, compensate Alaska for lost mining royalties and tax revenue, and would have the force of law. Our discussions with the Alaska congressional delegation on this issue have been productive.

Finally, conservation easements can be used to protect the habitats that Bristol Bay salmon need to spawn, grow and return to the sea. One of these efforts is to limit future development on a slice of the bay – over 44,000 acres of land and water – owned by the Pedro Bay Corporation, the village corporation of the Alaska Native village of Pedro Bay, in the three most productive watersheds of Lake Iliamna Bay.

The Conservation Fund and the Bristol Bay Heritage Land Trust are working to raise $20 million by the end of 2022 to complete the deal. (The Bristol Bay Native Corporation is a partner in the effort.) When completed, it will block construction of a road Pebble needs to access a deep-sea port. It would also bring long-term financial stability to Pedro Bay Corporation and its shareholders.

EPA action, legislation and on-the-ground conservation would not suffice as separate efforts, but together they can permanently protect Bristol Bay, the salmon and our way of life. The new opportunity to preserve the salmon fishery and the way of life it makes possible is essential. Future generations will be grateful that we did everything in our power to protect Bristol Bay.

As we head into the fishing season, the fish are coming back to us, perhaps in record numbers again this year. We are grateful for this abundance, and we are determined to take care of it.

The Times undertakes to publish a variety of letters For the editor. We would like to know what you think of this article or one of our articles. Here is some tips. And here is our email: letters@nytimes.com.

Will they ever return to the valley?