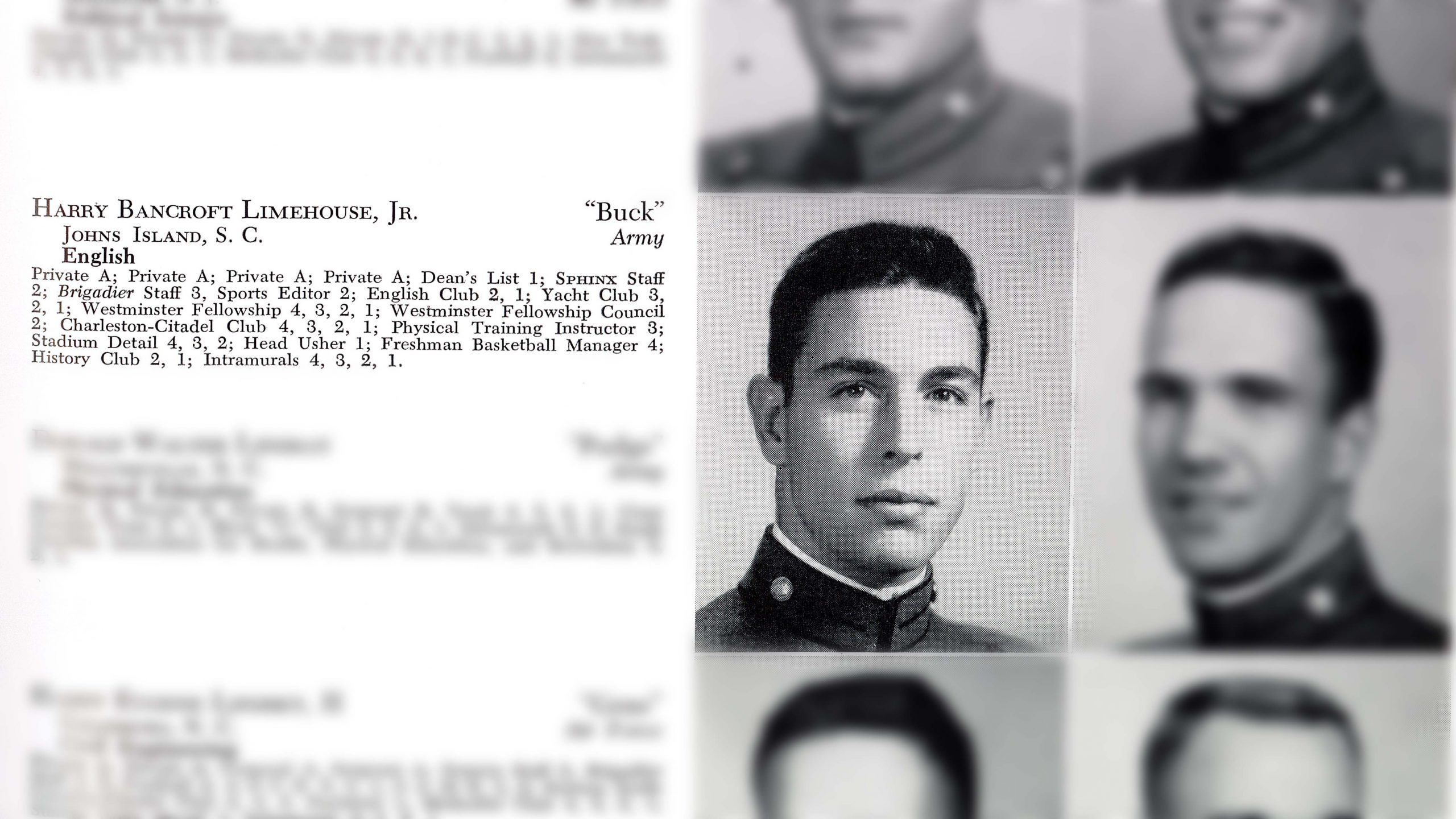 Note: Harry Limehouse Jr. graduated from the Citadel with a Bachelor of Arts in English in 1960. Limehouse served on the Citadel’s Board of Visitors from 2004 to 2007.

“I am grateful to have had the pleasure of knowing Mr. Limehouse, whom everyone called Buck, although I wish I had known him for longer,” said cadet John Acker, 23, a friend of the family. “But in a short time, I easily observed that he embodied everything a cadet should aspire to: he was a family man, a man of God, a servant of South Carolina and, most importantly, he was a man from the Citadel. Buck was one of a kind, a legend.

The service for Harry Limehouse Jr. will be held at noon on Saturday, February 26 at Summerall Chapel. Family and friends are invited to a reception – held in Buyer Hall, on the second floor of Mark Clark Hall – immediately after the service.

Buck was originally from Charleston, SC, where he graduated in 1960 from The Citadel. Buck was founder and owner of Limehouse Properties, a commercial real estate company that manages his business interests, which include the Indigo Inn, Meeting Street Inn and Jasmine House, all located in downtown Charleston and two franchise properties in Summerville, SC and St. George, SC. He had been a licensed real estate broker since February 1974. In recognition of his business skills, the South Carolina Hospitality Association named him “Hotelier of the Year” for 1994.

In 1995 he received an honorary doctorate in hospitality management from Johnson & Wales University and in 1996 the Citadel awarded him an honorary doctorate in commerce. Civic associations, regional organizations, and Republican causes have all benefited from Buck’s active and committed leadership style. His involvement ranges from the Charleston Board of Realtors (where he was founding chairman of their commercial real estate division) to chairing the Southern Governors Conference in 1992 and participating in the US presidential delegation to the 1987 Paris Air Show. .

He served on the Citadel’s Board of Visitors from 2004 until May 2007, when he resigned after being appointed Executive Director of SCDOT.

Buck was also a longtime member of the Hibernian Society. Buck grew up as an avid sportsman in the swamps and woods along South Carolina’s precious coastline. Its vow to protect water, land and air is backed up by its record. Until recently, he owned land in the heart of the SC ACE (Airy Hall Plantation) Basin and granted a conservation easement to protect the property from future development. He was the founding president of the Palmetto State Games, appointed by Governor Richard Riley, and served as the past chapter president of Ducks Unlimited. Buck was named South Carolina’s 1997 Conservationist of the Year by the SC Wildlife Federation and the National Wildlife Federation.

Buck held many roles at SCDOT. He was elected to the SCDOT Commission representing the 1st Congressional District in 1993. In 1994, Governor Carroll Campbell appointed him Chairman of the Commission. He was reappointed Chairman by Governor David Beasley in 1995, serving until 1999. During his tenure as Chairman of the SCDOT Committee, Buck was instrumental in establishing the State Infrastructure Bank (SIB) in 1997 and has been a member of the SIB Board of Directors since 1997-1999 where he participated in the initiation of several transportation projects that totaled billions of dollars in value. Some of these projects included the Cross Island Parkway, the Conway Bypass (SC 22), the Carolina Bays Parkway (SC 31), and the US 17 Ace Basin project. He also led SCDOT’s efforts to acquire Sandy Island in Georgetown County. This preservation purchase enabled SCDOT to create a 9,000-acre mitigation bank. This action has enabled coastal projects to move forward at an accelerated pace. Additionally, the island was protected from further development and remains a national treasure today.

In 2007, he was appointed by Governor Mark Sanford to serve as South Carolina’s first Secretary of Transportation and served in that role until January 2011. Buck has been dedicated to improving the operations of SCDOT. His initiatives will impact transportation in South Carolina for many years. The SCDOT was recognized as the nation’s most efficient Department of Transportation during his tenure as President. The South Carolina Transportation Policy & Research Council named him “Transportation Advocate of the Year” in May 1995 and he also won the SC Association of Taxpayers “Friend of the Taxpayer” award in 1996 for his fight against waste in the within the government. In addition to the previously mentioned service, Buck was also Chairman of the SC Public Railways Commission and on October 29, 2015 Buck was appointed to the SC Education Lottery Commission, serving until December 2018.

All friends and family are invited to attend the memorial service in Buck’s honor at the Citadel’s Summerall Chapel on a date to be announced later. The service will be presided over by the Reverend Frank Limehouse of Hobe Sound, Fla., and Dr. Harold Greene, pastor of Bennetts Point Interfaith Chapel. The service will be followed by a reception at Mark Clark Hall. In lieu of flowers, the family requests that donations be made to Bennetts Point Interfaith Chapel at 123 Bennetts Island Drive, Green Pond, SC 29446. Arrangements by J. Henry Stuhr, Inc., Downtown Chapel. A memorial message can be sent to the family by visiting our website at www.jhenrystuhr.com. Visit our guestbook at legacy.com/obituaries/charleston