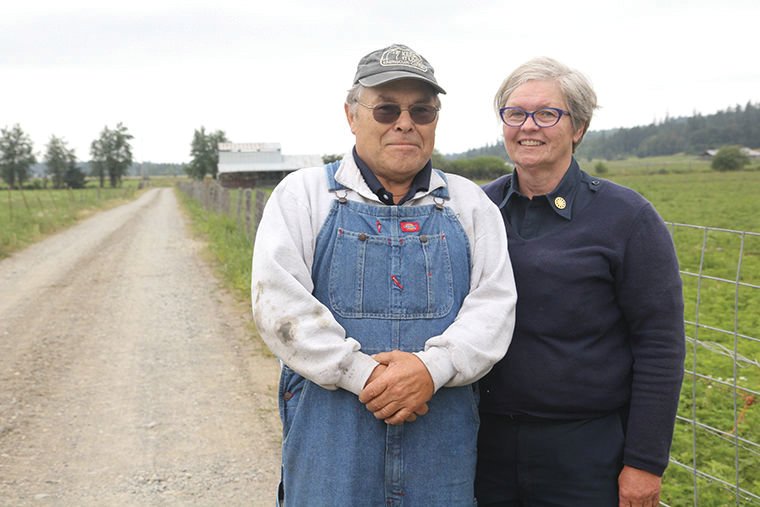 One of the largest, most famous and most productive beef farms in Jefferson County could be acquired by the port of Port Townsend.

The port has entered into a non-binding “letter of intent” with Roger and Sandy Short, owners of the 253-acre Short’s family farm, which gives the port four months to negotiate terms and price.

Meanwhile, the Shorts have agreed not to market the farm to other buyers.

The prospect of buying the farm would align the port and its countywide economic development mission with a historic and growing agricultural economy in Jefferson County, said port executive director Eron Berg.

Although known for its marinas and airport, the port also had a mission, in its century-old founding documents, to support agriculture. The farm, if acquired, would be its entry into this sector.

Port Commissioner Pete Hanke, who owns cattle himself, said many port districts in rural counties are immersed in agriculture.

In Walla Walla, Benton County and Sunnyside, Hanke said, “a lot has been done to provide infrastructure to help farmers in the field.”

Although the port cannot operate a farm, “we can provide food processing facilities that support farmers,” he said.

Hanke first heard that the Shorts were selling their farm and initiated Berg’s conversation with the couple.

“The port will have a lot of work to do in the coming months to see how it can play an appropriate role in the farming community,” Berg said.

Prior to a final agreement, if any, the port will survey the land, develop a plan and negotiate with the Shorts.

Any agreement must return to the Harbor Commission in open session for approval.

“The Shorts have agreed to work exclusively with the port for the next four months to see if we can do that,” Berg said.

THE POSSIBILITIES OF THE PORT

Although a final purchase price is subject to negotiation, Berg has estimated that it will exceed
$2 million. Most of the funds could come from existing reserves and a line of credit. In addition, the port would likely apply for grants for future acquisition and improvements.

“With a community-driven plan, we will be successful in providing grants with broader support for whatever that might look like,” Berg said.

In 2016, the Shorts signed a conservation easement managed by the Jefferson Land Trust that prevents the farm from being subdivided or converted out of agriculture. The easement means the entire 253 acres must be sold to a single buyer and must remain in farming and open space use. The Shorts were profusely thanked for taking this step to preserve one of the most valuable and largest farms in the county forever.

The easement was funded by the Washington State Wildlife and Recreation Program, the US Farm and Ranch Lands Protection Program, and the Jefferson County Conservation Futures Fund.

Given those restrictions, a likely private buyer of Short’s farm could be a wealthy person with horses or another out-of-region landlord, Berg said.

“I don’t know of any local farmers who could afford this land,” said Crystie Kisler, co-owner of Finnriver Farm, who spoke on behalf of the nonprofit Chimacum Center, which is dedicated to the health of county farms.

The port, on the other hand, could retain the farm as part of the county’s active agricultural economy.

For example, a storage facility could be used by many farmers to prepare produce for market, Berg said, and all farmers would benefit from regional marketing.

Berg pointed out the Port of Skagit, which purchased 123 acres in 2018 which is now home to 17 businesses and 184 jobs directly related to value-added agriculture.

Another role the port could play is as a transitional steward, holding the property until a buyer from the community can raise funds, Berg said.

“There’s a transitional role in how you take something and get it to where it needs to be,” Berg said, using the example of helping the harbor clean up the marina where the ship now sits. maritime center.

“In this case, it’s more about timing than cleaning,” he added.

“We need investments on a scale that small farmers cannot afford,” Kisler said.

Farmers could use cold storage, dry storage, scale compost, tool sharing and machine sharing, among other possible resources, she said.

“As real estate comes to market at these very high prices, we risk not having agricultural business models that can afford to buy this farmland,” Kisler said.

“What are going to be the strategies to help keep these farms operational, to basically feed the community? »

“Our core mission is to provide facilities that support good jobs,” he said. “We also support the idea of ​​community resilience by growing food here in this county.”

Berg noted that the prospect of the port acquiring the farm is recent and that specific planning for how the port would incorporate the property into its economic development mission is yet to come.

The Center Valley farm was purchased by Norris and Laura Short in 1945. They called it Valley View Farm, brought in dairy cows, and raised nine children. This included Roger, the second oldest son. The Shorts were active volunteers with the church, 4-H, and the Jefferson County Fair.

From 1970 Roger Short took over ownership, buying 88 of the dairy cows and renting half the farm. Over time, Short expanded to 600 Holsteins and grew forage on 500 acres of owned or leased land.

Roger and Sandy Short raised six children on the farm, two of whom—Kevin and Bill—still help out.

Beginning in 2003, driven by regulatory and economic forces, the Shorts transitioned from dairy cows to beef cows. The more than 200 beef cattle are all grass-fed Angus whose diet comes from the lush pastures. They are free of antibiotics, grains, growth hormones or steroids and have become a popular accessory for discerning beef eaters.

Short’s family farm is also known as a source of “magic soil,” a mixture that includes the nutrient-rich peat mix at the bottom of the Central Valley. The Shorts also provide pure peat, compost, biochar and washed dairy manure.

Additionally, the way the Shorts rotate cattle grazing has ensured the return of ducks, swans, and other waterfowl each year.

Nearly a mile of salmon-filled Chimacum Creek also runs through the property.

Hanke said additional steam flow work on the creek could be another benefit of port ownership.

Forum focuses on solar projects and foreign ownership of farmland

Housing demand is high in the Adirondacks. The same applies to the number of vacant dwellings. | News, Sports, Jobs