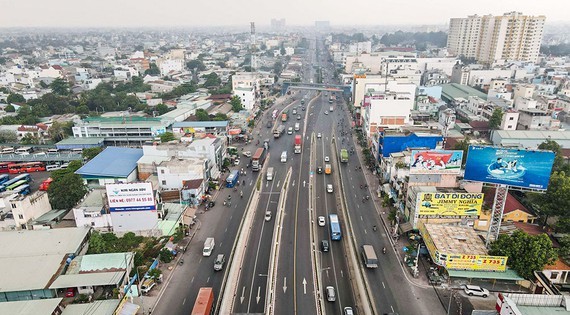 This proposal will be sent to the Prime Minister for approval, in order to overcome the difficulties of compensation, site clearance, speed up the project, as well as attract more investors.

In accordance with the decision 123/1998 / QD-TTg of July 10, 1998, this plan has been updated and adjusted in the general construction plan of Ho Chi Minh City with an orientation until 2025. It was approved by the Prime Minister under Decision 24 / QD-TTg dated January 6, 2010, and it included the North West urban area of â€‹â€‹6,084 hectares located across the two districts of Cu Chi and Hoc Mon. It was supposed to be one of the satellite urban areas of Ho Chi Minh City under the Ho Chi Minh City Master Plan development strategy. However, over the years, the tasks of offsetting, site remediation and other investments slowed down the project.

Over ten years ago, Ho Chi Minh City Infrastructure Investment JSC started a number of apartment projects for resettlement in the North West urban area, but nothing has ever been built. Mr. Le Van Viet, from Tan Phu Trung commune in Cu Chi district, said the project has been at a standstill for many years as the land is abandoned and unused, and people who want to build and transferring the land are also very difficult. On the other hand, urbanization is intensifying everywhere, with more and more houses being built, making it more and more difficult to compensate and clear.

This situation led the Planning and Architecture Department of Ho Chi Minh City to consider adjusting and supplementing the approved plan by changing some contents such as the size of the northwest urban area of â€‹â€‹6,084. hectares to 4,410 hectares; separate the existing residential area of â€‹â€‹1,674 hectares with a population of approximately 85,000 people by 2025, and adjust the population size from 300,000 to 600,000 people for the entire area; and reduce the size of the international university training area from 306 hectares to about 150 hectares, while keeping the scale of training and research unchanged.

According to the Department of Planning and Economy, the content specified in decision 24 / QD-TTg falls under the authority of the Prime Minister. The People’s Committee of Ho Chi Minh City organizes the adjustment of the general plan submitted to the Ministry of Construction for assessment of the tasks. However, if there is a delay while the general planning adjustment is approved, the northwest urban area will take another two to three years. This does not meet the investment and development needs of urban areas.

Due to these obstacles, the Department of Planning and Economy proposed to the People’s Committee of Ho Chi Minh City to review and report to the Prime Minister to organize the planning of the North West urban area.

Speaking to Saigon Investment, Ms. Pham Thi Thanh Hien, Chairperson of Cu Chi District People’s Committee, said that there is a need to adapt the plan of the northwest urban area to the actual situation in order to accelerate the implementation of the project.

Based on the approved planning tasks, the North West Urban Area Management Board will organize the formation of a 1: 5000 area plan. However, the planning process faces many difficulties and obstacles. Specifically, according to the approved task of the 1: 50,000 scale area plan of the Northwest Urban Area, it is determined that in this area there is an existing residential area with an expected population of 85,000. , with the average target of residential land of the entire area at 130 square meters per person. The actual defined limit of approximately 1,674 hectares of the existing residential area is not appropriate, as it will reduce the urban area when it is reduced to only 4,410 hectares, which is not in line with the general planning project. of the construction of Ho Chi Minh City until 2025., and which had already been approved by the Prime Minister.

In addition, the Northwestern urban area following the general planning direction was previously a modern ecological urban area with low construction density. With the current reality of development, this area is an important urban functional area for exploiting the land fund in the northwestern part of Ho Chi Minh City, with most of the traffic circulating along National Route 22, Ring Road 3, 4 and Ho Chi Minh City. -Moc Bai Expressway, and in particular along metro line 2. Therefore, it is necessary to make further adjustments and change the nature from eco-urban to smart urban, in accordance with the Guidance for the Development of the Public Transport System for Urban Development Planning (TOD ), in combination with modern technological elements for this area.

According to the approved area planning task at 1: 50,000 scale, the population size of the northwest urban area is 300,000 people, of which the population of the existing residential area is approximately 57,465. people, and by 2025 will be about 85,000 people. Of the remaining 4,410 hectares, there is an International University Urban Area project covering 923 hectares, which has been approved with a detailed planning project at a scale of 1: 2,000, with a population of 68,000 people. Therefore, the population density spread over the remaining 3,487 hectares of only 147,000 people is very low, which equates to a population density of 33.33 people per hectare. This does not meet the criteria according to the standards and regulations in force because the average population density for a class 5 city is at least 100 people per hectare. It is difficult to respect the urban nature and the objectives and orientations of town planning proposed in such a case.

According to the detailed 1: 2000 scale development plan of the International University Urban Zone, the training and research zone alone covers 306 hectares, which is difficult to receive more investment. Therefore, in order to increase the feasibility of new investments and make efficient use of land resources, it is advisable to reduce the size of the international university urban area, but keeping the scale of training and research unchanged.