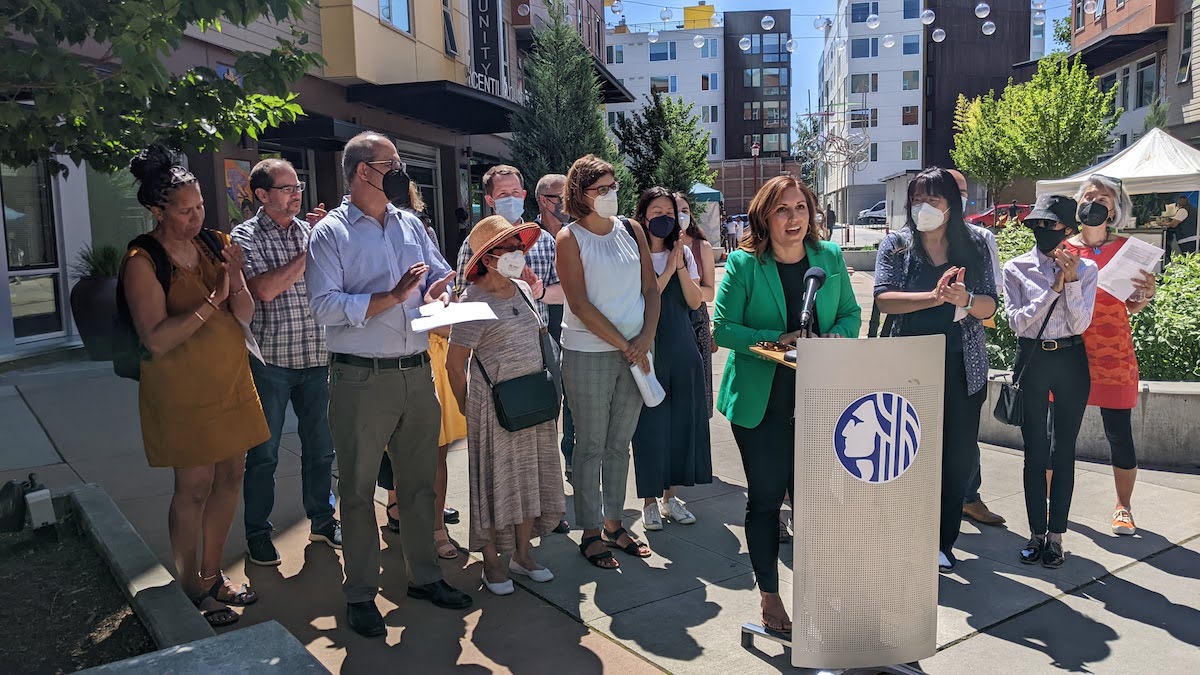 Teresa Mosqueda’s Board Member JumpStart Housing Community Self-Determination Fund promises to allocate 13% of JumpStart’s progressive payroll tax to support community-based organizations (CBOs) and their efforts to address displacement, gentrification and housing insecurity. This fund comes from JumpStart Seattlewhich was approved by the Seattle City Council in 2020 to raise funds for affordable housing and small businesses by requiring large corporations to pay a tax for all Seattle employees who earn $150,000 a year or more.

The Community Self-Determination Fund focuses on neighborhood sustainability and equitable development. The bill provides an estimated $24 million in annual support for community organizations seeking to create affordable housing that serves their communities and the people in them. It also works to repeal long-standing discriminatory policies and lending practices that have historically made it difficult for CBOs to access the financing needed to develop these facilities.

The bill outlining the creation of the JumpStart Self-Determination Fund was unanimously passed by the council on June 28, but more is needed to determine its future. In 2020, a similar bill was passed by council with a 7-2 vote, but former mayor Jenny Durkan refused to sign it, arguing that the bill created a spending problem. This year’s bill has yet to be signed by Mayor Bruce Harrell. Yet even if the JumpStart bill is signed into law, community organizations will need a lot more support.

“Before this legislation, the property developer had to have experience in housing construction. They had to have operated at least three buildings, they had to have secured permanent finance within five years and they had to be in good standing with loans from the Office of Housing,” Mosqueda said. “Well, if you go into this work because you see the need in your community, you won’t have that experience. So really, we tried to remove those clauses that said, “Hey, you have to partner with organizations that have that experience,” which doesn’t put them totally in the self-determination role.

Velma Veloria, who works with the association, Seattle Filipino Community Center (FCS), is aware of these discriminatory policies. Properties of FCS include Filipino Community Center (FCC) in Hillman City, renovated in 2008, and their second building, Filipino community village (FCV), which was completed in 2021. FCV integrates social service programs and community spaces with 95 affordable housing units for seniors. Despite this, the demand for affordable housing for families remained. The FCV units are not large enough for the village residents’ grandchildren to spend the night there, so the FCC began looking for more land to develop a third housing complex. When the owner of the adjoining FCC property said he was ready to put the property on the market, he asked FCC if he wanted to buy it and gave FCC the right of first refusal.

Recounting the tedious fundraising process to purchase the land next to the FCC, Veloria explained, “The City said that in order for us to get funding to acquire the land, we must have constructed three buildings to be able to access the money. Then we went to the county and they said, “Well, we’re really worried; we want to make it fairer, especially for communities of color and for smaller organizations. That’s when this bill was proposed by councilor Teresa Mosqueda. She said we need to change these policies so that more people have access to land acquisition.

While Mosqueda’s goal of devoting $24 million to community organizations is certainly a step in the right direction to combat displacement, when you consider that the Philippine community center has spent around $32 million on its housing complex. for seniors, we can understand that $24 million distributed among several organizations is simply not enough.

Yet, since the Community Self-Determination Fund is based on a percentage of the JumpStart tax, its amount is expected to increase each year. According to Mosqueda, “JumpStart is expected to bring in $230 million this year… We expect it to be closer to $270 or $280 million next year.” And the percentage that goes to housing will continue to grow year by year, and so the percentage that goes to this specific self-determination fund is growing year by year.

Seattle Chinatown International District Preservation and Development Authority (SCIDpda), the fund’s potential partner organization, hopes the JumpStart bill will foster true collaboration between the City and CBOs. “The City is committed to supporting organizations like ours to claim land and build housing for our community,” said Jamie Lee, Director of Community Initiatives. “I think it will be more of a partnership and the less we have to prove ourselves, or [having to] apply for this grant and wait for the response and all that happens when you ask for private funds – and sometimes also public funds.

The Community Self-Determination Fund could also provide much-needed early support to organizations in need of capacity building and technical assistance.

“If we start granting funds early on and then they can go to other lenders and get additional funds, we’ve created the stability the organization needs to say to another lender, ‘You also, you should be a lender; the city of Seattle trusted us,” Mosqueda explained. “We shouldn’t put these organizations in a position where they have to prove themselves to the banks first and then come to the City. We should invest in the public good for those nonprofits that are trying to serve the community, and then help them secure additional funds if needed. »

Affordable housing serves the community by addressing displacement and housing insecurity, but it also creates jobs and provides opportunities for organizations to invest in community businesses.

In 2022, ACLT spent $77.3 million to develop Africatown Plaza, a 126-unit affordable housing complex for singles and families. The development was recently awarded the 2022 Gold Nugget Grand Prize for Best Affordable Housing Community on the Boards. The ACLT was one of the companies designated by Mosqueda’s office as a potential recipient of community self-determination funds; the success of Africatown and its tenants showcases the vast potential of Seattle BIPOC-led businesses.

“Communion opened and within a year was recognized as one of the best new restaurants to open in the world,” said Garrett, of one of Africatown Plaza’s tenants. “It’s the shine; the talent that is in our community – but without space, without opportunity, without resources, that potential cannot be fully realized.