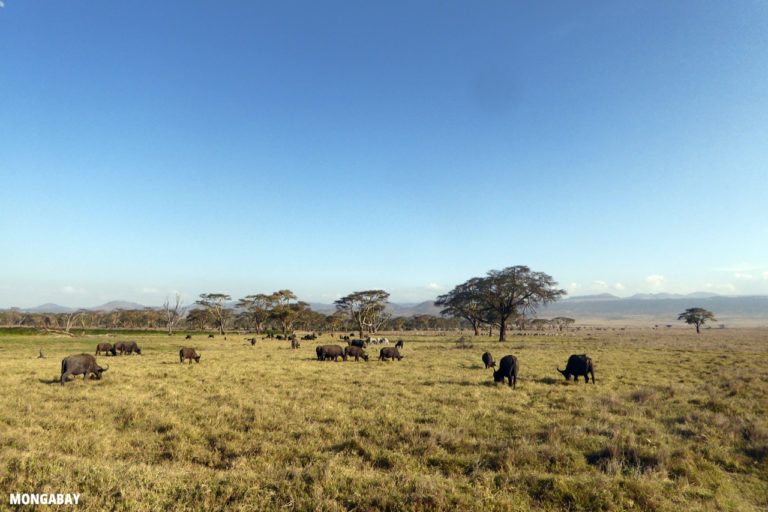 Latest ‘plan for the planet’ calls for protecting 44% of land, home to 1.8 billion people

How much of the Earth’s land surface needs protection to ensure the planet’s biodiversity? A new estimate points to 44%, or 64 million square kilometers (25 million square miles), an area that is home to almost a quarter of humanity.

“Our study is the current best estimate of how much land we need to conserve to stop the biodiversity crisis,” James R. Allan, lead author of the study published in the journal Science, said in a statement. “This is essentially a conservation plan for the planet, and we need to implement it quickly.”

Countries have missed the deadline to safeguard 17% of landscapes by 2020 set by the UN Convention on Biological Diversity (CBD). The newly proposed target is also significantly higher than the target currently under discussion for the CBD’s post-2020 agenda: to protect 30% of land and oceans by 2030.

Scientists say ambitious targets are needed to halt the huge human-induced loss of biodiversity happening around the world and to escape the worst effects of climate change. There is an urgent need to expand protections, but how much, where and in what form are still debated.

Several multidisciplinary teams are scrambling to come up with numbers that are scientifically defensible and can hold in negotiations at a much-delayed CBD summit scheduled for later this year in China.

Currently, the targets proposed by various groups vary considerably, from 26% to 60%. There does not appear to be a scientific consensus, and arriving at one through diplomatic efforts should not be easy. A major challenge is to ensure tangible benefits for wildlife without imposing intolerable costs on humans anywhere.

“The paper does an excellent job of pointing directly to the conundrum of scaling up conservation efforts in places where there are large numbers of people, and many of whom are heavily dependent on nature,” David Obura, Director of Coastal Oceans Research and Development-Indian Ocean (CORDIO) East Africa, said in an email to Mongabay. “This calls for new approaches to conservation that are people-centered and ethical.”

The components of the safety net proposed by Allan et al. are existing protected areas (PAs), key biodiversity areas (KBAs) and ecologically intact areas. They also mapped the distribution of nearly 35,600 species – including mammals, birds, amphibians and reptiles – to identify areas most in need of conservation. The formulation does not take into account plant diversity. Including this information would result in an even higher target, according to previous research.

But these lands are not just wildlife habitats. The area identified for conservation action by the Science study is home to 1.8 billion people. The authors say they are aware that large-scale interventions could turn into land grabbing in some areas, further worsening the situation for vulnerable communities. They cite “human rights abuses, displacement, militarized forms of violence and conflicts with local worldviews” that can occur under the guise of environmental protection.

They do not suggest grouping the 64 million km2 into protected areas as defined by the IUCN, the world conservation authority. Instead, the researchers suggest focusing “conservation attention” on these landscapes, ranging from PA designation to implementing sustainable land use policies.

“Conservation actions must promote the autonomy and self-determination of people who call the earth their home,” said Allan, a biodiversity specialist at the University of Amsterdam. “We have many effective levers ranging from empowerment of indigenous peoples, to policies that limit deforestation, to protected areas, depending on the local context.”

Since such a massive expansion is unlikely to occur quickly, the study authors also recommend prioritizing biologically rich regions most likely to be converted to human use by 2030. In worst-case scenario, around 1.3 million km2 (500,000 sq mi) of untouched land, an area larger than South Africa, could be converted by 2030, according to their modelling.

Much of the wildlife habitat at risk of conversion is in Africa (over 800,500 km2 or 309,000 mi2). The researchers point out that much of this destruction in less industrialized countries is due to overconsumption in wealthier countries. “These countries have a moral obligation to reduce these demands,” write the authors of the article. However, their prescriptions for doing so are broad, such as moving away from an “unsustainable model based on promoting environmentally destructive industries” and funding local conservation efforts.

“As a scientific article [it] stops short of making it clear that successful conservation action must be fully integrated into a comprehensive paradigm shift of the global community away from consumption/profit maximization and reducing the drivers of decline,” Obura said. “It doesn’t matter what we do with biodiversity actions if we don’t reduce the drivers of decline.”

The new CBD goals will determine the direction of the conservation movement and will also become the yardstick by which progress is measured in different countries. The objectives will probably be different depending on the country. Indeed, the proportion of a country’s landmass deemed worthy and feasible for conservation activities varies.

Tropical countries are generally richer in biodiversity and report high rates of endemism. At the same time, countries like the United States, Canada, Russia, Australia and Brazil, which are home to vast untouched landscapes, will need to continue to secure large swathes of their national territories.

Complicating the equation is that in many countries, land that brings immediate benefits to people through agriculture must be set aside, meaning that local communities will end up paying a high price for the conversation. “We must recognize that in an equity-based approach, such trade-offs will often involve trade-offs on the conservation side,” the study authors said.

It remains to be seen whether CBD member countries can strike a deal that translates the shared responsibility to preserve the natural world into differentiated but concrete conservation goals.

Blockchain Technology Market in Transportation and Logistics Industry: North America to Occupy 55% Market Share | The maritime segment will be important for revenue generation

What Are The Steps To Obtaining A Land Loan? Procedure And Rates