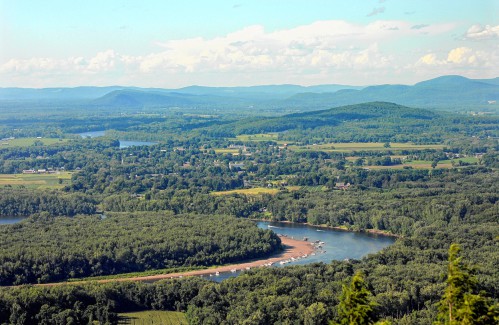 AMHERST – A $5 million campaign for Kestrel Land Trust, aimed at preserving 5,000 acres of land in the region, including parts of Mount Tom and the Mount Holyoke Range, improving existing sites and creating new new trails, is nearing completion.

The land trust recently announced that its Promise to the Valley campaign, launched quietly at the start of the pandemic, is less than $200,000 from the finish line to achieve the 52-year-old’s biggest private fundraising goal. history of Kestrel.

“We have been thrilled and inspired by the generosity of nearly 100 visionary community members who have already committed $4.8 million to invest in the Valley’s future,” Chief Executive Kristin DeBoer said in a statement. .

Kestrel’s hope is that by July the final money will arrive so that its mission to protect forests and farmland can continue, and so it can deal with both the climate crisis and the pressures of development, as evidenced by the 24,000 acres of land lost each year in New England to projects. .

Joel Russell, chairman of the board of Kestrel and a professional conservation lawyer, observes that many properties in the area could be sold in the next few years.

“Thousands of acres of forests and farms will change hands over the next generation,” Russell said. “This may be our last chance to act while there is still time to preserve what is left.”

Many communities and families are reaching out to Ketsrel for help, says Rosemary Arnold, a member of the Kestrel Board of Directors and the Holyoke Conservation Commission.

“The future of the Valley depends on the decisions we all make today,” Arnold said. “Land conservation is not a luxury for some, but a necessity for all.

The campaign has three components, each with a specific objective.

First, $3 million is directed to what is called a conservation opportunity fund which, over five years, 5,000 acres will be preserved in perpetuity. Areas targeted for preservation include the Mount Holyoke Range and Mount Tom, the Quabbin Reservoir area, Brewer’s Creek, and agricultural fields. To do this job, it costs about $2,000 to save an acre of forest and $10,000 to save an acre of farmland.

“We believe that by expanding Kestrel’s ability to act quickly and strategically, we can seize the opportunity to ensure that what we love about the Valley is maintained for generations to come,” DeBoer said.

About $1.5 million goes into a special location fund, with that money going to help the seven nature retreats owned by Kestrel. These include the site of its new headquarters in the Sweet Alice Conservation Area at the foot of the Mount Holyoke Range in Amherst, the new Whately Center Woods, an accessible trail next to the new Mount Tom North Trailhead Park in Easthampton and a 140 acre forest around Ames Pond in Shutesbury.

Finally, $500,000 will be donated to the Valley Trails Fund, to give Kestrel the resources to create or improve 10 new local trails over five years.

Founded in 1970, Kestrel in 2011 merged with Valley Land Fund, and the two organizations together have helped conserve more than 27,000 acres.

“As Kestrel launches our next 50 years of service to the Valley, we prepare to remain a vibrant community presence and an effective force for conservation in the region,” DeBoer said.

Scott Merzbach can be contacted at smerzbach@gazettenet.com.