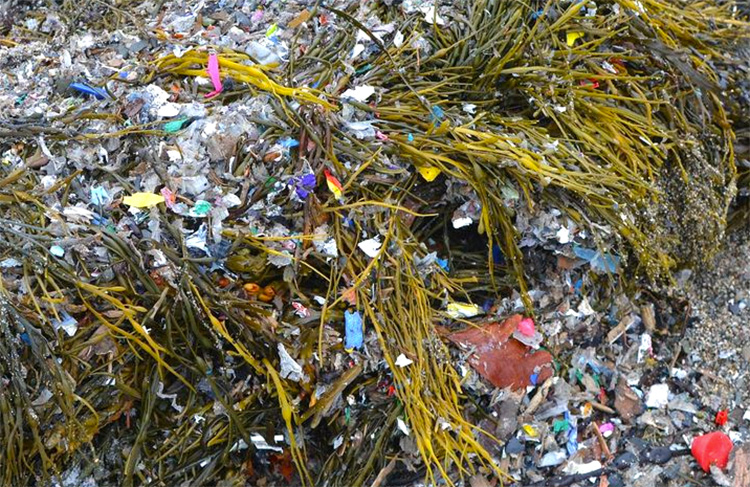 PENOBSCOT BAY – On December 2, 2020, two large bales of compacted trash from Ireland fell into the waters of Penobscot Bay as they were unloaded from a sea freighter at Mack Point in Searsport, scattering plastic shards on the tide and currents. The public outcry was large as the news spread around the world, and the Maine Department of Environmental Protection has vowed to launch an investigation.

The balls weighed about 2,500 pounds together and consisted of about 80% shredded plastic, 11% paper, 8% fabric, and 1% other non-decayable material.

They were wrapped in thin plastic film for transportation. During the transfer from the vessel to the dock, the lifting straps of two of the balls slipped and the balls fell. A bullet split open after hitting the jetty infrastructure, fell into the water and sank immediately. The other bullet fell directly into the water between the jetty and the vessel, remained intact, and slowly sank within 5 to 10 minutes. During this time, it was carried by the wind and north current around the bow of the ship and sank out of sight to the north and east of the ship.

But the Islesboro Islands Trust wants a much larger fine imposed on Sprague for violating Maine’s pollution control law, 38 MRS § 413 (1).

The land trust submitted testimony to the DEP, saying:

(1) shredded plastic waste is a petroleum product containing harmful and persistent chemicals which are becoming increasingly bioavailable in the environment;

(2) an appropriate penalty of $ 340,000 for violating 38 MRS § 412 (1) for at least 34 days is supported by comparable penalty levels found in Maine law and in line with at least one other penalty related to oil imposed by DEP; and

(3) Sprague’s Terminal Operations Manual (TOM), Safety Inspection Form and Dry Cargo Risk Assessment Form must explicitly recognize that shredded plastic waste is (a) hazardous, (b ) can in all likelihood never be fully recovered when discarded in Maine waters, and (c) represents an unacceptable level of risk when transported wrapped in breakable film rather than in sealed containers.

Petroleum and petroleum products are the basic ingredient in the manufacture of plastics, and plastics contain chemicals that are seriously harmful to humans and the environment.

“A fine of $ 340,000 matches Pan American Railways’ fine of $ 310,225 for illegal oil discharges into the Kennebec River. The IIT also recommended that $ 25,000 of this total be allocated as an additional environmental project to the Friends of Sears Island in light of their immediate and substantial assistance in managing the clean-up along the coast of Sears Island. Sears Island and the likelihood they have their eyes on the ground if another spill, ”the Land Trust wrote.

“Sprague’s operating resources must be penalized for dumping shredded plastic waste into Penobscot Bay and for failing to immediately report the plastic spill; protocols and penalties must be imposed to discourage the importation of shredded plastic waste in this form and which ensure thorough, rapid and efficient clean-up of any waste spills in the future, ”the land trust said.