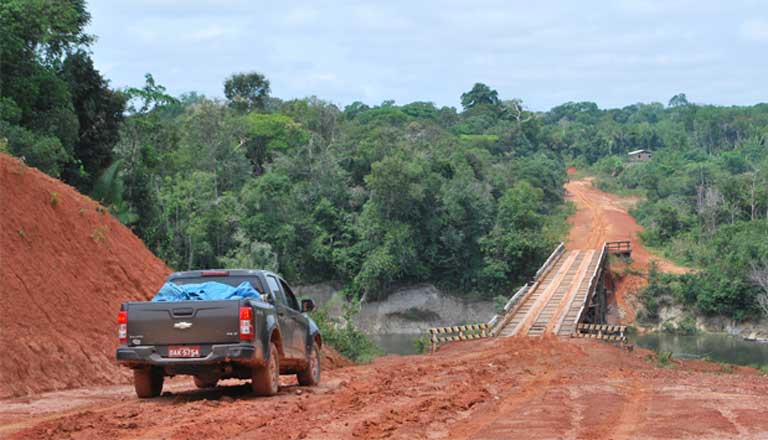 The rate of deforestation has increased in the region around Brazil’s BR-319 highway since the federal government announced interest in resuming road works, according to a new study.

The article written by researchers at the Brazilian National Institute for Space Research (INPE) and the University of Kansas reports deforestation in what is called the area of â€‹â€‹direct influence of the highway. Deforestation between July and September 2020 is 16.4 square kilometers (6.3 square miles), an increase of 25% from the same period in previous years.

The BR-319, also known as the Manaus-Porto Velho highway, was built during Brazil’s military dictatorship between 1968 and 1973, then abandoned in 1988. Years of neglect and rain made the road unusable in the country. over time. Its 885.9-kilometer (550-mile) stretch is the only overland road connecting Manaus, the state capital of Amazonas, to the south and southwest of Brazil.

The motorway is divided into segments which currently fall under different legal classifications. The end segments, called A and B, make up the first 198 and last 164 kilometers (123 and 102 miles) of the highway. These are already paved and do not require new environmental authorizations. Instead, the focus is on the middle section of the highway, 400 km (249 mi) of unpaved road, and segment C, or “Charlie”, a 52 km (32 mi) section in the middle that should be redone.

In June 2020, the federal government issued an official call for tenders for the work needed in Section C. A contract was signed in December, but work was suspended in March of this year following a complaint filed by the Federal Prosecutor’s Office (MPF). Then, in April, the Federal Supreme Court (TSJ) authorized work on section C.

The Federal Prosecutor’s Office indicates that an environmental impact study (EIA / Rima) must be carried out, while the National Department of Transport Infrastructure (DNIT) considers the project to be the repair of a road built in the years 1970, making it exempt from further study. .

The DNIT specifies that “not repairing the highway is a major upheaval for order, security and the public economy because it is the only road link between RondÃ´nia [state] and the states of Amazonas and Roraima and, therefore, the rest of Brazil. He adds that this connectivity is particularly important in the context of the fight against the COVID-19 pandemic.

However, state prosecutor Rafael Rocha said the DNIT’s argument could not be applied in the current scenario. “How long would it take to pave the road?” The situation in the north [of Brazil] It would have been no different if the highway had been paved, â€he said.

In January of this year, the DNIT published a call for tenders to select a company to carry out environmental studies of the 400 km unpaved middle section of the highway, in order to proceed with the paving. Experts have expressed concern that restarting the original dictatorship project could push the infamous Deforestation Arc even deeper into the southern part of Amazonas state. According to the authors of the INPE study, approximately 90% of the area of â€‹â€‹direct influence of BR-319 consists of intact forest.

â€œThe region is mainly made up of protected areas and indigenous lands. This will require careful assessment due to the importance of the region to the Amazon rainforest as a whole, â€said Luiz AragÃ£o, co-author of the article and head of the Land Observation and Geoinformatics Division at INPE.

Researchers from the Remote Sensing Center and the Environmental Services Management Laboratory at the University of Minas Gerais (UFMG) published in November 2020 a technical note on the deforestation that would be triggered as a result of paving along the entire length of the BR- 319. The results were used as a reference in the INPE study.

The researchers compared two scenarios: in the first, the highway remains unpaved and the average rate of deforestation of the past five years is maintained. In the second, the works proposed to pave the entire section of the motorway are carried out and have impacts linked to migratory flows, agricultural expansion and land occupation. The conclusion of the technical note for the second scenario is that â€œdeforestation rates under these conditions will be high, reaching 9,400 square kilometers. [3,600 mi2] per year by 2050.

In the same scenario, “accumulated deforestation would reach 170,000 square kilometers [65,600 mi2 by 2050], four times more than what was projected on the basis of the historical average.

â€œAccumulated CO2 emissions would also more than quadruple, reaching 8 billion tonnes, the equivalent of emissions from 22 years of deforestation in the Amazon based on 2019 rates,â€ the UFMG researchers wrote.

Raoni RajÃ£o, head of the UFMG’s Environmental Services Management Laboratory and one of the researchers who contributed to the technical note, said there was no justification for paving the unpaved sections of BR-319. . â€œThe project makes no sense from an environmental, economic or social point of view. It is a political demand that will give access to one of the largest regions of Brazil still untouched by land grabbers. “

RajÃ£o refuted the argument that the paving of the road will integrate the region with other parts of Brazil. “The Manaus Free Trade Zone generates 80 billion Brazilian reais [$15.8 billion] per year, most of which leave the state. It uses a specific type of transport, but that doesn’t mean it’s isolated, â€he said.

The main transport channels used in Amazonas, and even in much of the Amazon region, are the network of rivers. â€œThere are different types of water boats that could receive investments to help local communities, such as floating schools and ambulance boats,â€ RajÃ£o said.

Luiz AragÃ£o of INPE echoes the sight. â€œThere is a consolidated river transport system on the Madeira River,â€ he said. “You have to analyze the gains that would actually result from paving the highway, taking into account the maintenance costs.”

RajÃ£o said the stretch between Porto Velho and Manaus was almost 1,000 km (620 mi) long, roughly the same distance as Paris to Berlin. “Manaus is remote from southwest Brazil not because of the asphalt, but because it is geographically very remote,” he said. â€œThe pavement will not shorten the distance. “

Banner image of the BR-319 highway by Philip M. Fearnside.

This article was reported by the Brazilian Mongabay team and first published here on our Brazil site on June 7, 2021.

Uprooted in Alford? Even if the small farm’s bonus arrives, its future is cloudy | New

Big Sky Pride returns to Helena for a week of celebration