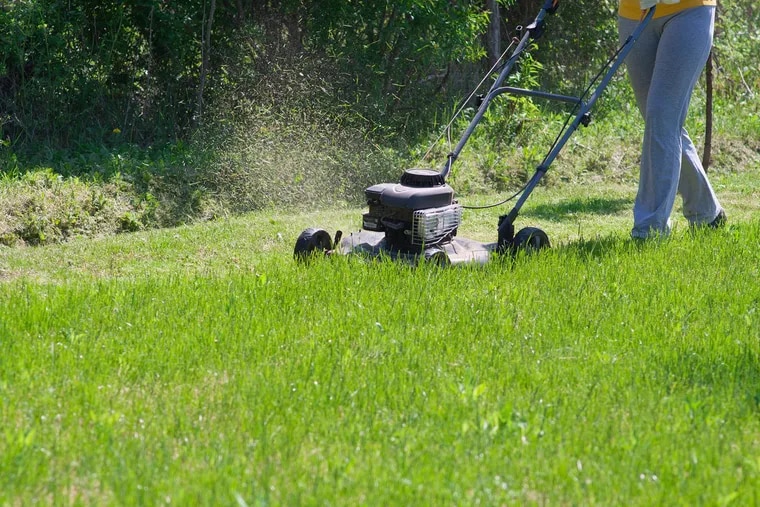 Summer is officially here. For many Americans, that means green blankets for children to play in.

There are roughly 40 to 50 million acres of lawn in the continental United States, almost as much as all of the nation’s national parks combined. In 2020, Americans spent $ 105 billion to keep their lawns green and clean.

But our love of weed comes at an environmental cost.

Maintaining these lawns also uses nearly 3 trillion gallons of water per year, as well as 59 million pounds of pesticides, which can seep into our lands and waterways, according to the Environmental Protection Agency. .

Data from the Department of Transportation shows that in 2018, Americans used nearly 3 billion gallons of gasoline to operate lawn and garden equipment. This is the equivalent of 6 million passenger cars driving for a year.

As these issues become more prominent in climate change discussions, you can take steps to more sustainably manage the impact on your lawn, including choosing organic fertilizers, avoiding pesticides, and using electric lawn care equipment.

But how we take care of our lawns is secondary to how much lawn we have in the first place, experts say. Having less grass and more plants is one of the most important factors in keeping a green yard.

“The lawn, ecologically, is dead space,” said Doug Tallamy, entomologist at the University of Delaware and author of Nature’s Best Hope: A New Approach to Conservation That Starts in Your Garden.

The solution, he says, is ultimately less grass. He recommends that people cut the amount of sod in their backyard by half. But getting there, he says, will require a culture change.

America’s infatuation with grassy expanses dates back to the founding fathers. Thomas Jefferson cultivated a lawn – previously a staple of European aristocracy – in his Monticello estate. By the second half of the 20th century, as the middle class grew, bought homes, and spread to the suburbs, lawns had become a staple of America.

But, Tallamy insists, change is possible. â€œYou can be an important part of conservation,â€ he said. “You are not helpless.”

Laying mulch is a starting point. It quickly kills the grass and offers a blank canvas for planting.

â€œIf you have lawn under a mature tree, convert it to an area of â€‹â€‹mulch,â€ suggested Kathy Connolly, a Connecticut landscaper who recommends about six inches of rough arborist wood chips for the job. Connolly also recommends converting part of your lawn to walkways, rockeries, or other items. “Ecologically, however,” she said, “the best thing to do is to plant native trees and shrubs.”

Invasive plants, said Tallamy, “ecologically castrate the land around us.” Native plants, on the other hand, often have deep root structures, making them ideal for storing water or providing drainage. They also co-evolved for local conditions.

More broadly, Tallamy said native landscapes can help refocus our gardens on plants’ ecological purpose, which is to produce food. Plant energy is transmitted through the food chain, often via insects.

Tallamy said native flora better support native fauna and therefore help fight species decline. Tallamy is a fan of oak trees, which come in 91 native species, grow almost all over the country and attract caterpillars, a key species to support other wildlife – to raise a brood of chicks, a pair of robins. needs 6,000 caterpillars and 9,000 caterpillars in just 16 days, Tallamy said.

â€œIt’s not that we are kind to nature,â€ said Tallamy. “We need this, or we’re in big trouble.”

Others put less emphasis on the nativity and more on the diversity of species and types of plants in a yard.

â€œYes, we want natives, but let’s be inclusive and don’t exclude plants that come from somewhere,â€ said Juliet Stromberg, professor at Arizona State University, one of more than a dozen environmentalists who wrote a letter claiming that the origin of a plant is less important than its environmental impact.

â€œWhat I would suggest is loosen the reins a bit,â€ she said. “If you bring the same kind of plant, the bugs will be fine.”

Casey Reynolds, executive director of Turf grass Producers International, a trade association for grass farmers, argues that grass can be a great option, especially in urban or suburban environments. One of the benefits, he says, is that lawns provide a play area for people.

â€œI would never tell people to plant weed everywhere,â€ he said. “[But] I cannot enjoy my lawn if it is made up of shrubs. “

The value of grass falls on a continuum, said Mark Hostetler, an urban environmentalist at the University of Florida. On the one hand, native wild herbs are wonderful carbon sinks that support biodiversity. But when the grass is maintained, he said, it loses many of its environmental benefits.

Hostetler said that well-maintained lawns are â€œbetter than cement. . . (but) ecologically horrible. Cutting the grass, he explained, releases the carbon that was stored in the clippings and stops the growth of other plants that might enter. Emissions from mowers, fertilizers, water and other types of lawn care further outweigh the environmental gains.

Whether you choose native or non-native replacement plants, cutting your lawn is admittedly a difficult business. Plants cost money and landscaping takes time. Outdoor space of all kinds is a luxury in many urban, low-income and minority communities, not to mention the ability to prioritize plants.

â€œI understand that changing your landscape is a pain in the neck,â€ said Jim Kleinwachter, director of the Conservation @ Home program at the Conservation Foundation. But it does offer an advantage: â€œYou’re going to have color all summer long instead of one thing. “