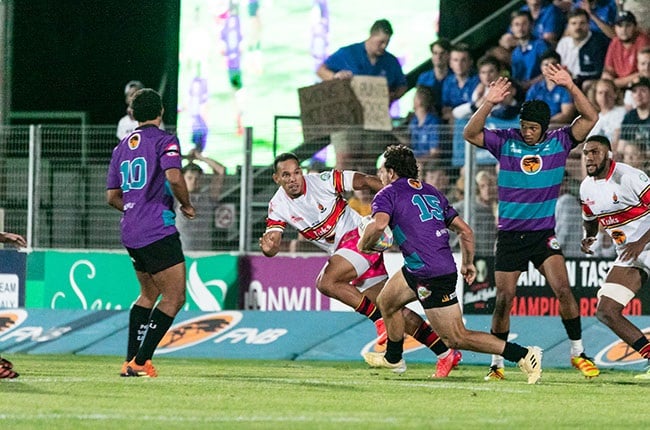 The NWU Eagles got an exciting 17-8 win against Tuks at the Fanie du Toit Sports Ground in Potchefstroom on Monday night.

In the main televised match of the fourth round of the competition, NWU had entered the contest as a slight underdog and in 8th position on the log of Tuks’ 4th.

The vibrant crowd that filled the stands, however, created an electric atmosphere, screaming for the Eagles from start to finish and it certainly had an impact on the proceedings.

For both teams, this crowd energy resulted in a few moments where emotions boiled over, and there was a red card for Tuks full-back Stefan Coetzee in the 20th minute.

Coetzee had kicked Tuks into a 3-0 lead shortly before that but a 31st minute try from NWU No 8 Andre Fouche which was converted by Nivan Petersen gave the Eagles a 7-3 lead which they took at halftime.

The game was physical throughout, especially in the set pieces and the breakdown, and Tuks regained the lead in the 56th minute through lock Divan Venter.

It didn’t convert – the kick on goal of the night was not a highlight – but Tuks had done enough to take an 8-7 lead.

It was short-lived, and it was again the men up front who got the job done as a rolling maul saw Gustav Erlank take a 12-8 lead.

The moment that put the game to bed, however, came in the 72nd minute when a superbly worked set piece from NWO saw left winger Naiden Jaarts dive into the corner.

The conversion was short this time, but the damage was done.

In the previous kick-off, a stunning hat-trick from full-back Kyle Cyster gave Madibaz a famous 36-26 victory – their first of the season – against CUT Ixias at Madibaz Stadium.