Deforestation in Colombia | Earth.Org – Past | Present

The loss of forests in Colombia is a complex story of conflict, mismanagement and illegal activity. For decades, reckless human actions have contributed to the destruction of the country’s forests, one of its most important resources. Today, cattle breeding, coca cultivation, and gold mining are big sources of income for rebel groups that have taken control of the country’s green spaces since the 2016 peace deal that ended decades of civil war. Although more than half of the territory is covered with trees, deforestation in Colombia makes the nation more vulnerable to climate change and contributes to the impoverishment of its population.

Deforestation in Colombia: the numbers

About 55% of Colombia is forested, covered by two main tropical forests: the Amazon and the Chocó. The former – which spans nine South American countries, although most of it lies within Brazil’s borders – is one of the most biodiverse places in the world, home to more than 3 million animals and more than 2,500 plant species. And if left standing, it can generate around $8.2 billion in annual revenue, a study found. However, mainly due to the reckless policies of Brazilian President and climate denier Jair Bolsonaro, deforestation rates in the world’s green lung have reached record highs in recent years. Although much smaller, the Chocó-Darién Rainforest has an extremely rich biodiversity and for this reason it is listed as one of the 25 global biodiversity hotspots of priority for conservation. This global ecoregion, which stretches along the Pacific coast of Colombia and north of Panama along the Caribbean coast, has suffered some of the highest levels of deforestation on record.

Between 2002 and 2020, Colombia was losing its green cover at an unprecedented rate. 1.66 million hectares of the total tree cover loss of 4.7 million hectares suffered in nearly two decades was made up of primary rainforests, the most biodiverse and carbon-rich green areas in the world. More than half of deforestation took place in Colombian Amazonwhich covers about 10% of the total territory of the country.

We take a closer look at the main drivers of deforestation in Colombia and its destructive effects on the environment, the country’s biodiversity and indigenous communities.

The main drivers of deforestation in Colombia

After decades of brutal civil war, a peace accord was signed in 2016 between the Colombian government and the Revolutionary Armed Forces of Colombia (FARC). Since then, deforestation has exploded. Indeed, with the approach of peace, the strict controls put in place by the FARC to protect the forests for strategic reasons were suddenly relaxed when the guerrilla group left the region, causing a scramble for resources among the farmers, miners and loggers and a 44% increase in deforestation and land grabbing. New illegal and less organized splinter groups replaced the FARC almost immediately and have since dominated parts of the rainforest. While the Colombian People’s Army used the canopy as protection against foreign attack, these new armed groups are considerably smaller and have no incentive to preserve the forests because they do not need protection.

In 2017 – the year after the peace accord was signed – the number of trees felled in Colombia accounted for 2.6% of global deforestation. In 2020, the country lost nearly 171,000 hectares of forest, an area twice the size of New York City and 8% larger than the previous year. Freed from controls and protective laws, people started cutting down trees for illegal mining, logging, cocoa farming as well as cattle ranching – Colombia’s main source of income. This activity alone contributed 1.4% of gross national product (GNP) and 21.8% of agricultural GNP in 2017.

​​Land grabbing is considered a major structural cause of deforestation in the northwest Amazon, as it encourages land use change to make room for extensive cattle ranching. Beef and veal consumption in Colombia is on the rise and is expected to reach 11.84 kg per capita by 2028. In order to satisfy the country’s insatiable demand for red meat, Colombia has significantly expanded its production in recent years. It now has more than 500,000 sites devoted to breeding as well as around 23.4 million head of cattle. Due to the lack of available space, people have started clearing land in protected areas such as Chiribiquete National Park, a UNESCO World Heritage Site comprising over 4 million hectares of land in the Amazon. Colombian. Here, a investigation from the Environmental Investigation Agency (EIA) found that illegal livestock production has tripled since 2015, with the cattle population increasing by 349% between 2016 and 2019. In four years, nearly 17,000 hectares of forest have been cleared in the forest reserve. Area surrounding the north and northeast of Chiribiquete National Park. 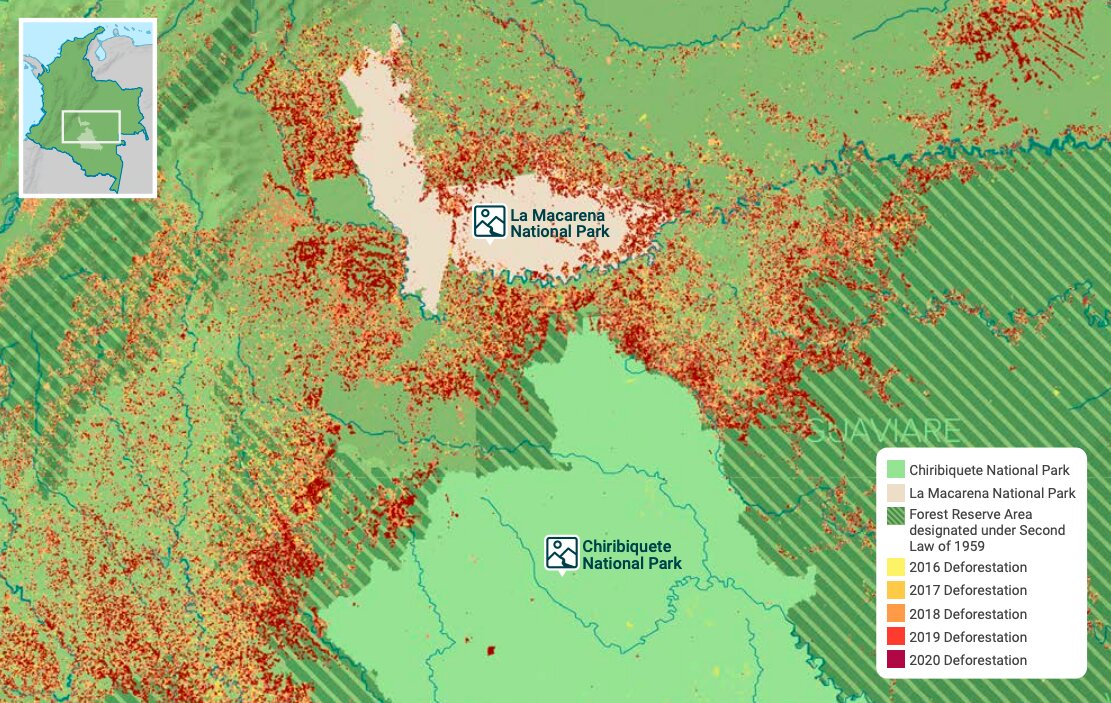 Figure 2: Deforestation in the northern area of ​​Chiribiquete and La Macarena National Parks, 2016-2020

Among the main causes of deforestation in Colombia is illegal crops, which feeds international cocaine pipelines. Swathes of forest are illegally cleared each year to make way for coca plantations – which cover almost 154,000 hectares of land. This crop is notorious for its detrimental environmental impact, as the chemicals used to process the medicines – such as gasoline and sulfuric acid – are highly toxic and contribute to polluting the rivers in the area.

Another main driver is logging for timber, most of which is done illegally in protected and often remote areas where anti-deforestation laws imposed by the government in recent years are difficult to enforce. The illegal extraction, transportation and trafficking of protected timber species to flourishing international markets accounts for nearly 10% of the country’s total forest loss. Some 186 wood species found in the Colombian Amazon are sold illegally or legally, but most of the revenue comes from just nine coveted tree species. 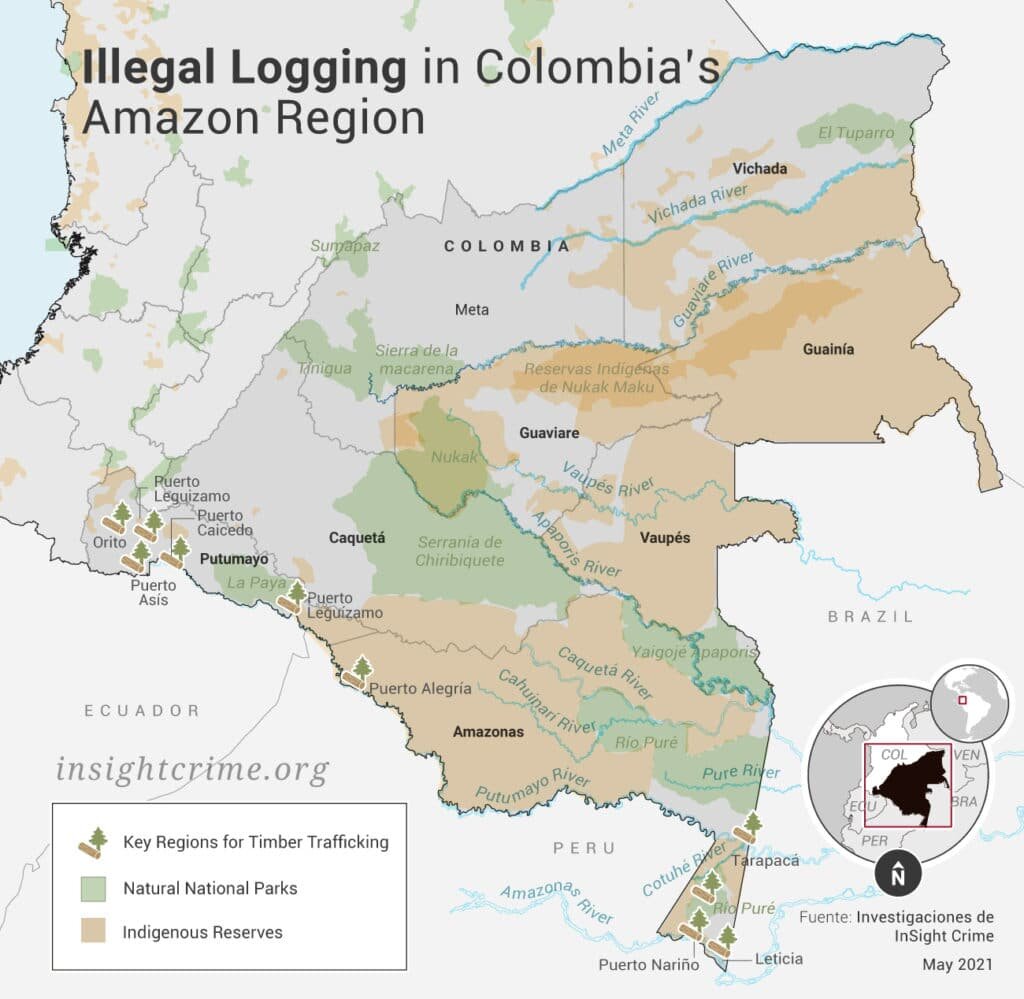 Other lucrative activities are also often linked to deforestation. One of them is gold mining, of which Colombia is one of the world’s largest exporters. However, most gold mining in the country is illegal and strongly linked to land degradation and contamination of waterways, especially in the Chocó rainforest. Land conversion also occurs to make space for profitable extractive industries such as natural gas and oil. The latter is the main export product of the country. Despite crude oil exports down since 2014in 2020 Colombia exported nearly US$7.5 billion worth of crude oil in the United States, China, Panama, India and Saint Lucia in the eastern Caribbean Sea.

Colombia is also the fourth largest producer of Palm oil and by far the largest in the Western Hemisphere. The lucrative market has encouraged the expansion of large-scale plantations, especially in the lowland coastal forests of Chocó province. The unprecedented expansion of the palm oil supply chain exploited thousands of aboriginal people of these areas, generating protests and suffering among local communities despite government promises of post-conflict sustainable development and zero deforestation.

How is the government tackling deforestation?

Once the largest and most important carbon sinks in the world, tropical forests are being destroyed at an unsustainable rate and the countries they occupy are paying the highest price. Deforestation in Colombia harms the country’s environment, biodiversity and indigenous communities. According to a report study by the World Resources Institute (WRI) and Climate Focus. Moreover, what is considered the most biodiverse country in the world is losing many of its unique animal and plant species. Of the 3,429 known species of amphibians, birds, mammals and reptiles that live in Colombia – a fifth of which are endemic, meaning they cannot be found anywhere else in the world – more than 10% are threatened.

In 2020, President Iván Duque signed the Commitment to nature at the UN Biodiversity Summit with 92 other nations. A year later, at the COP26 climate summit, more than 110 countries, including Colombia, signed the Glasgow Leaders Statement on Forest and Land Use, pledging to end and reverse deforestation by 2030 and pledging to strengthen the rights of indigenous communities. On this occasion, Duque promised to transform 30% of the country’s land into protected areas by the end of his administration in the summer of 2022. If the signing of these agreements has certainly sent a positive signal on the ambition and the government’s desire to step up its efforts in the fight against climate change, the data shows that Colombia still has a long way to go to achieve its ambitions. In recent years, the government has presented several sustainable projects to preserve the virgin rainforest, stop deforestation and fight against climate change. One of the main countries investing in these projects – which range from green energy and transport to sustainable livelihoods and climate policy projects – is the UK. To curb the escalating rates of deforestation in the country, the government has even put in place programs to reward farmers with financial incentives to prevent them from cutting down trees. However, the amount of money offered to them is often extremely small and many landowners do not think it is worth giving up their land.

Despite all these efforts, effective law enforcement – a crucial element of environmental reforms – is still lacking in the country, which is plagued by corruption. On several occasions, international organizations have criticized Colombian politicians for allowing environmental crimes to be committed with impunity. Additionally, ranches across the country are protected by authorities who often turn a blind eye to illegal deforestation, as in the case of Chiribiquete National Park. Finally, despite the government’s efforts, legislation is often difficult to apply in remote areas, which makes it more difficult for the authorities to exercise power.

There is no doubt that Colombia needs stronger government action if it is to reverse this destructive trend and fulfill its promise to end deforestation by 2030. With imminent electionsthe country’s best hope for changing the situation is to elect a president with a strong plan to protect the environment, safeguard biodiversity and promote the energy transition.