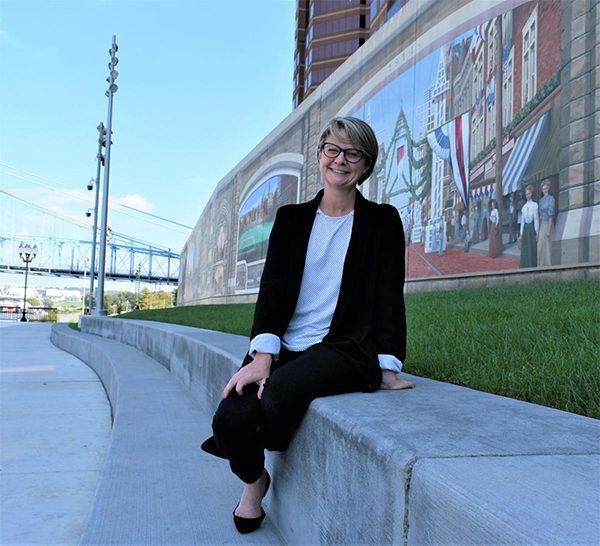 Covington Director of Human Resources, an “Old Soul” whose interests help her approach to improving the lives of employees

In her personal engagements, the refined interests of Covington’s new HR manager beg the question: Did Cindy Lewis emerge from a time portal in 19th century England?

A skilled rider, Lewis frequently rides her horse through the verdant countryside of Cincinnati’s Camargo Hunt country. A fan of classical music, she plays the piano, studies the violin and sits on the board of directors of Concert: Nova, a local chamber music organization. She writes children’s books (she will publish next year). She has an undergraduate degree in theater. And she (sort of) managed to find the time to get into beekeeping.

The passion behind these interests has shaped Lewis’ approach to his work: As a writer Lewis loves stories and believes they are at the heart of human resources work – employees share their concerns, their hopes, their difficulties and their dreams.

“I think I’m fascinated by people – I like to connect with them – and I like their stories,” she said. “As a human resources professional, you are intimately involved in people’s lives and you have the opportunity to improve their quality of life at work. We spend so much time at work – eight to ten hours a day – and you want this experience to be as positive as possible. “

Covington City Manager Ken Smith said it was both Lewis’ enthusiasm and the breadth of her work experience that selected her from 64 applicants to replace JoAnn Simpson, who took on his retirement after 20 years with the city.

“Cindy’s drive to innovate and her incredible enthusiasm made her the obvious choice for Covington’s new HR director,” said Smith. “The selection committee was immediately impressed and from its first weeks of work, it proves them right.

Smith said Lewis had taken the lead, facing a host of issues upon his arrival, including a number of COVID-19 cases at Town Hall that called for reducing office capacity through a home work plan.

Simpson (who good-naturedly and stubbornly refused to “cooperate” with any article ending his career, despite much begging) retired in September after a long and successful tenure as director of human resources.

Smith said it was difficult to lose an employee with Simpson’s vast experience, institutional knowledge and demeanor.

“I could always count on JoAnn to provide a calm and reasonable response no matter what,” said Smith. “I will miss working with her for sure, but I am happy that she can travel the world more now that she is retired.”

Today Lewis brings to the job what she describes as a “strength and situation-based, service-oriented style of leadership.”

Born and raised in Cincinnati, Lewis said she was impressed with her new home of work.

“Covington is a beautiful city,” said Lewis. “I love this city. Its architecture is amazing. And, as you can see, I’m kind of an old soul. It just speaks to my artistic side. There is a wonderful culture here.

As vice president of human resources for Community Health Alliance in Fairfield, Ohio, Lewis created an entire human resources department from the ground up for two newly merged organizations that grew from 60 to 250 employees in four years.

As deputy director of labor and employee relations at the University of Miami in Oxford, Ohio, Lewis was responsible for approximately 3,500 employees and managed the university’s administrative programs, including the Family Medical Leave Act, workers’ compensation and housing for Americans with disabilities. She also acted as an academic liaison for union negotiations, grievances, mediation and arbitration hearings.

A stint with Ohio Attorney General Jim Petro while studying for his Masters in Educational Leadership in Miami gave him a taste for government work.

As Covington’s Director of Human Resources, Lewis will perform a range of duties, including:

• Help develop goals, objectives, policies and procedures for the management and improvement of human resources.

• Advise and consult with department heads, human resource associations, individuals and others on HR matters, policies and procedures.

• Serve as a resource on trends in arbitration and collective bargaining.

A career in human resources was not Lewis’s original life path. She started out as a theater major, focusing on directing.

“I enjoyed taking a play, reimagining it and preparing it for an audience in a way that tells a story that they could connect with,” Lewis said.

“I was like, ‘I worked up to undergrad, so I’ll work through to senior school,” Lewis recalls.

She got the job and ended up loving it, so when the same professor suggested she try HR, she heeded that advice as well and found herself hooked.

For Lewis, this is perhaps one of his children’s books that presents his wisest and most insightful message, one that can surely be applied in a professional setting.

The Coon Hound of Carrington Hunt is the true story of a small dog who was abandoned along the road in Cincinnati. A Camargo hunter who saw the dog thrown from a car put the little dog with the club foxhounds, where he learned to hunt. But, said Lewis, the little dog preferred to hunt alone rather than join a group of foxhounds. So the club found the right fit for him – and now he’s one of the prettiest and happiest hunting dogs around.

“It’s like real life,” Lewis said. “Sometimes you don’t quite land where you’re supposed to be, but where you land leads you to something else, and sometimes that’s the best thing. It’s a journey.

If there are forces of conversion, Goan expects the state to identify and act