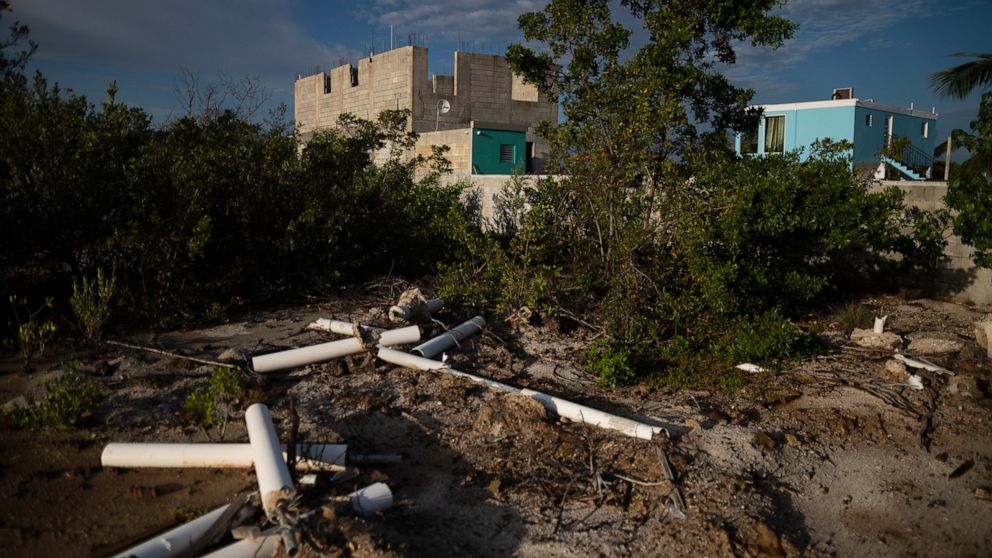 SALINAS, Puerto Rico — Jacqueline Vázquez was sitting on the couch when her phone rang.

She had just returned from a government office where she had filed a complaint for illegal construction in an ecological reserve. The reserve is dedicated to one of the largest mangrove forests on the island near its neighborhood in southern Puerto Rico.

“What the hell were you doing at Natural Resources?” yelled a male voice into his phone.

Vázquez took it as a threat, one of many that community leaders like her have received as outraged Puerto Ricans demand answers from their officials. Lax oversight, shrinking budgets and illegal government permits have led to increased construction in protected areas and regions, some of which are prone to flooding or landslides.

The ongoing investigation into illegally built homes in Puerto Rico’s second-largest estuary, where authorities say more than 3,600 mangrove trees have been cut down, has led to public hearings, the launch of a criminal probe by the Puerto Rico’s Department of Justice and the review of similar cases. Environmentalists warn that these cases leave the US territory even more vulnerable to climate change amid wetter and more intense hurricane seasons.

“This is one of the biggest environmental crimes I’ve seen,” Representative Jesús Manuel Ortiz said at an April 27 public hearing on the issue. ” It’s scandalous. A crime is committed in front of everyone.

Concrete block houses with fences, swimming pools and even a wharf have been built illegally inside the Jobos Bay Estuarine National Research Reserve. The reserve has protected nearly 2,900 acres of mangrove forest surrounded by waters of varying shades of turquoise. It is home to the critically endangered hawksbill turtle and vulnerable West Indian manatee, among other species.

Activists and some public workers say they are frustrated and feeling alone in their fight as they accuse the Puerto Rico Department of Natural Resources and other agencies of not doing their job.

When a lawmaker in a public hearing asked the director of the Jobos Bay reserve who exactly had failed in his duties by authorizing the illegal construction, she replied: “The whole system”.

Reserve director Aixa Pabón also accused the Ministry of Natural Resources of being negligent and questioned why the Puerto Rico Planning Council was absent, saying “incompetence, negligence (and) slowness” prevalent in some government agencies. Her voice cracked at times and she said she feared personal and professional backlash for testifying, “But the truth sets me free, and God is with me.”

Last month, the secretary of the natural resources department resigned. He told a local radio station that some employees investigating illegal construction were receiving death threats.

Neither the Department of Natural Resources nor the Puerto Rico Planning Board, which is responsible for inspecting all authorized permits, responded to requests for comment.

The themes of public lands and climate vulnerability play out in another high-profile case in the popular surf town of Rincon in western Puerto Rico. In February, a judge overturned a government-issued permit that allowed the Sun and Beach condominium to rebuild a pool, hot tub and other recreational areas destroyed by Hurricane Maria in September 2017.

“The proposed construction,” the court said, “would privatize a maritime-terrestrial public domain asset.”

The judge also noted that 2% of the property in question is protected land where no urban development should have been allowed, and 12% is located in a coastal area at high risk of flooding.

Testimony in that case included an employee of the environmental division of Puerto Rico’s permit management office who admitted to intervening directly to expedite the now-cancelled permit. He also said a friend and business partner of his was a consultant on the project, but said his action was justified because the permit officer assigned to the case was doing the assessment incorrectly.

The judge ruled that the land was public after the island’s Planning Board found the government had granted the permit in breach of local laws. However, this case is still before the courts and residents fear that the developers will illegally restart the reconstruction. Critically endangered sea turtles have nested there in the past.

In both cases, the illegal construction was exposed after concerned residents launched protests and held government agencies to account.

“We feel the fight here is endless. It’s very, very frustrating,” said Mónica Timothée Vega, a civil lawyer. At the request of a friend, she is also fighting another development project in a wetland in the northeastern coastal town of Luquillo.

That case is pending in court, with Timothée accusing Puerto Rico’s permit management office of granting nine extensions and three renewals to developers when, by law, it can only grant three extensions and one renewal per case.

Timothée also said a neighbor asked for public documents related to the case in January and was only able to get them after she and her brother, who is also working on the case, went to court. .

“Why does the community need lawyers to get documents? ” she asked. Their frustration intensified, she said, when documents previously available online at the Permit Management Office began to disappear as she and her brother dug into the case.

Pedro Cardona Roig, architect, urban planner and former vice president of the Puerto Rico Planning Council, said the same thing happened to him as he investigated on his own what happened in Salinas, where Jobos Bay. He said that of the 16 documents he had previously viewed online, only a handful remain.

Gabriel Hernández, secretary of the Office of Permit Management, told The Associated Press that his agency is struggling, with limited staff, to deal with a recent wave of fake permits that show names, addresses and even official maps of illegally altered parcels.

“The number keeps increasing every day,” he said, adding that planning employees have now identified more than 100 fake permits. At least eight of them were permits to connect utilities to illegal houses in Jobos Bay. He pointed out that his agency had never authorized a permit there.

“People sometimes do what they want,” he said.

According to Puerto Rico’s Water and Sewage Authority, at least 60 customers are now connected to Jobos Bay. The island’s Electric Power Authority referred nearly 50 people to the Puerto Rico Department of Justice for illegal connections.

Hernández of the permits office said he instructed his employees to use good judgment and caution when considering a request for a nature reserve or protected area.

“Some may have escaped, but that’s not the norm,” he said.

Illegal coastal development is a big concern for activists on an island where more than half of the population of 3.2 million people live near the ocean. Mangroves protect the shoreline from storm surges during hurricanes. Corals do this too, but they die in part due to sediment runoff. A warming planet means hurricanes carry more rain, have more energy, and intensify faster.

“The mangroves are like the person standing there enduring whatever may happen,” said Vázquez, the community leader. “It’s like a wall that saves us.”

A growing number of lawmakers favor an island-wide investigation into illegal construction taking place in protected areas. Activists are also pushing for approval of a full moratorium on coastal construction, a proposal Governor Pedro Pierluisi called “excessive”. However, he said a moratorium could be applied in areas suffering from erosion or other effects of climate change.

The department’s acting secretary announced on April 27 that he was preparing to file eviction orders against 12 people accused of living illegally in Jobos Bay and sought a court order to demolish the homes. Officials said the occupiers would be liable to pay at least $4 million in environmental damages and accused the group of taking advantage of the pandemic and the aftermath of Hurricane Maria to build and expand structures.

Despite the looming legal battle over protection at Jobos Bay, activists and lawyers remain wary. They note that the Natural Resources Ranger Corps has only seven members to oversee the area that includes Jobos Bay instead of the 12 recommended by the federal government. When the Corps imposed fines of $250,000 on those who illegally occupy the land, the government reduced the fines to $3,000. The rangers themselves also received a cease and desist letter from the squatters.

“You can imagine how we felt,” said Sgt. Ángel Colón told lawmakers in a public hearing. “It was like a bucket of cold water.”

Vázquez, the community leader of Las Mareas in the city of Salinas, knows that feeling.

The lawsuit she filed in 2019 is blocked at Puerto Rico’s Department of Natural Resources. Officials say they need more information. The land abuse complaint is one of more than 100 filed by people across Puerto Rico pending action since 2019.